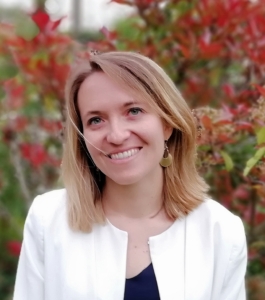 Alice Damiani is a VP International Sales Manager, with a broad experience in the film distribution industry. She holds a Master in Business Management, with a specialisation in Management of Cultural Activities at Toulouse Business School in France.

Alice started her career as an intern with the distribution and international sales department at Paris-based PYRAMIDE FILMS, (coordinating the distribution of Aki Kaurismäki’s LE HAVRE, the international sales of KILLING BONO, ANGELE AND TONY…), before becoming Junior Product Manager of the video department, monitoring the release of Youssef Chahine’s box set, and TOMBOY by Céline Sciamma.

She later joined DOC & FILM INTERNATIONAL in 2012 as an International Sales Manager, leading negotiations of arthouse feature films and documentaries all around the world and overseeing acquisitions and marketing strategies of new projects, such as Frederick Wiseman documentaries (NATIONAL GALLERY, AT BERKELEY…), Golden Lion’s Winner SACRO GRA, Sophie Fiennes’ THE PERVERT’S GUIDE TO IDEOLOGY. Thanks to this experience, she learnt all the different process from developing negotiation skills, adapting to different cultures and nationalities, and improving her knowledge in marketing, technical and financial aspects of this industry.

In 2015, she moved to media group FRANCE TV DISTRIBUTION (parent company of the public broadcaster FRANCE TELEVISIONS), France’s leading exporter of TV programs. She led the international sales of the TV catalogue (documentaries, fiction), and was responsible for the negotiation of the animated TV series’ worldwide sales. She also monitored the reintroduction of the Feature Film department, implementing the strategy of acquisitions and international sales, in coordination with the marketing department.

In 2017, she’s become VP International Sales at Boulogne-based TF1 STUDIO, which centralises the film business of TF1 Group, one of the leading European media groups. She oversees international sales for the Feature Film & TV catalogue in major territories, including prestigious classic titles (Palme d’Or THE PIANO, Oscar-winning titles such as LA VIE EN ROSE) as well as recent titles: WAY DOWN by Jaume Balaguero, THE EXTRAORDINARY JOURNEY OF THE FAKIR by Ken Scott, 2019’s French entry for the Academy Awards MEMOIR OF WAR, by Emmanuel Finkiel. Alice evaluates potential of projects for international strategies and is involved in acquisitions and coproduction strategies for the development of new contents.

What attracted you to Inside Pictures? What is your impression of the programme so far?
After ten years as an international sales executive, I wanted to take a significant step forward. Taking part into Inside Pictures is a great opportunity to broaden my scope of knowledge in an international environment. I can definitely confirm that so far, this programme is a strong learning platform, and a key incentive to develop skills thanks to the different courses: I was really impressed by the variety and the quality of the first sessions in London, the interaction with speakers and other alumni. We already discussed deeply about new challenges and opportunities of the industry, through key financial and business affairs courses, distribution and sales perspectives etc. It really opened new perspectives, and I felt lucky to meet executives and producers from different countries and fields in this industry. As for the project work, it’s really valuable to be working closely on it with my project partner Tessa Inkelaar: it’s great to have different perspectives and go through all the different steps of financing a movie together.

Libraries used to be considered a massive asset for Sales companies and determined in large parts their value? Do you think this is still true? How has the decline of DVD changed the value of the library? What in your opinion is key to making the most of your libraries and the titles within it?
Library titles are definitely strong assets in our department: library sales still represent a large percentage of our turnover. DVD market decline changed the balance of our sales on a territory per territory basis, but the rise and development of new markets (new territories, but also new activities such as TVOD; EST; SVO; AVOD) managed to maintain the library sales very active. In order to highlight the value of the library, building collections of directors, authors, festival-driven movies is definitely important. We constantly have to promote and develop restoration programs for key titles, work with prestigious classic film festivals and film institutes, to keep our libraries attractive and active in the world.

Another part of your job is assessing the international and commercial potential of projects. What makes a project a good asset for sales and distribution? How early and how hands on do you get involved in projects?
As far as I’m concerned, the concept, treatment and storytelling are the most important elements when evaluating a project. We are looking for new original and universal stories, with strong marketing potential. Afterwards, we can build all the elements that become essential assets for our sales and distribution strategies: efficient title and log line; short and strong pitch which can be easily understood in different cultures etc. Also, for sales and distribution estimates, we definitely give a lot of importance to the production values, the cast and the director attached.

We can get early on the projects, even before a script is ready, and before the director gets attached. We foster strong relationship with producers and work with them from the development stage onwards.

How do you see the sales business developing in the next few years?
This has been a constantly changing business along the years and it’s hard to know where the market is going! Above all, sales business is not about only selling today, and it will keep going that way: we have to oversee projects from the pre-production stage, to follow the different production steps, to provide the key marketing elements for the international campaign, and to elaborate the distribution strategy. I personally think that sales business will still be very active, not only on a global perspective with big platforms coming on board, but also on a territory per territory basis. Of course there has been a lot of changes in local territories, and we will have to deal with geopolitical changes, new political and cultural rules, changes of habits, but we have managed to establish long-term relationships with local distributors and TV channels. We also need to develop different branches, such as focusing as well on our TV drama sales, selling remake rights which is a growing market, developing our relations with new players, etc.

What are you working on at the moment? What are you most excited about?
We are currently working on several international projects, such as the European production WAY DOWN, a heist movie directed by Jaume Balagueró, as well as CARMEN, the first feature film by the well-known choreographer Benjamin Millepied who will be working on a contemporary adaptation of the classical opera, along with the music composer Nicholas Britell (composer of MOONLIGHT). French-speaking movies still represent a strong market for our sales business, and next year we will be presenting a spy comedy with Dany Boon and Philippe Katerine. I’m delighted to be able to work on a rich diversity of titles, at different stages of development.