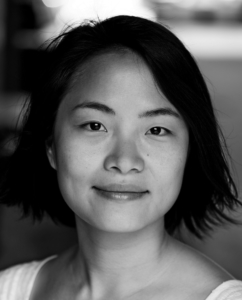 Eun-Zi Kim is an Austrian film executive with South Korean origins who lives and works in Berlin. Kim has a law degree from Bristol and UCL (London), and has gained film and series production experience in Korea, Germany and Austria.

Whilst embarking on the Atelier Ludwigsburg-Paris, a post-graduate production course by La Fémis and the Film Academy Baden-Württemberg, Kim worked with producer Karl Baumgartner from Pandora Film on the German-Finnish-Israeli documentary IN THE DARKROOM (IDFA 2012) by Nadav Schirmann and the US-German-French documentary FEMMEfille by Kiki Allgeier (IDFA Pitch 2013, DOK Leipzig 2014).

In 2013 Kim joined DCM, a production and distribution company, as their Business & Legal Affairs Manager. Whilst DCM was initially a distributor for commercial arthouse films including LORO, MARADONA, I, TONYA, MOONLIGHT, CAROL, LA GRANDE BELLEZZA and THE ARTIST, DCM and hence Kim’s responsibilities now cover the whole value chain of a film from the first idea, through development, packaging and production or acquisition of German and international films to the promotion and exploitation in all media, for the German, UK and US production arm DCM Pictures and the German and Swiss distribution company DCM Film Distribution. DCM has produced the German box office hit franchise BIBI & TINA 1-4 and has co-financed European and UK productions such as QUARTET and KON-TIKI, before diving into the co-development and co-production of European and European-US projects including the Danish-Swedish-German co-production BECOMING ASTRID by Pernille Fischer Christensen (Berlinale Special Gala 2018), MEDITERRANEA, A CIAMBRA and SUICIDE TOURIST.

Today the development slate of DCM as lead producer includes both international and European productions. DCM increasingly sources both content and talent from the US and the UK and has expanded from its traditional feature-film background to high-end series.

There are two hearts beating inside of Kim. One, which flourishes in the business side i.e. the development, packaging, financing, production and licensing of films. And another one, which is Kim discovering, furthering and producing creative talent and content. Hence besides her role at DCM, Kim continues to work as a creative producer. Kim is an alumna of the Torino Film Lab, of EAVE TTB and HFF Munich’s script lab (Drehbuchwerkstatt München).

Compared to my peers I am quite a newbie in the media industry. But even in the ten years that I have been a part of it, the industry has changed drastically (plummeting theatrical admissions and home video sales for independent arthouse films and a decrease in TV sales, which is not compensated in monetary terms by the shift to digital consumption, i.e. EST and VOD sales,), and I was wondering what the business model of the future would be (what type of content, what format, what genre, what budget, which financing model). I wanted to contemplate these points with a wide range of people from the industry, to learn from their experience and together come up, in the best of worlds, with a magic formula.

My expectations for the course so far have been widely exceeded. As one of my peers said when asked why he applied for Inside Pictures: “I just wanted to make friends.” And how right he was! Besides being the most topical and best organized course I have experienced so far, boasting high calibre speakers who earnestly share and stir a discussion about the most burning challenges the industry faces, and just as impressive peers who raise the level of insights and reflection to a peek, … I am also surrounded by new friends in the industry! The only thing left to do is come up with that formula!

You are working across a broad range of productions. What are the differences between working on a local title aimed at the local market and an international title, especially when it comes to negotiating early stage deals and finance with a UK or US partner coming from different legal practices?

From a development and production perspective, German-language local productions have a wider range of public development funds to tap from. Hence there are hardly any co-development agreements in place, which is more common with English-language or other international productions that we are involved in. What is also striking is how long option-purchase and writer’s agreements for English-language productions are, compared to deals with German talents. This may be based on the strength of IP protection awarded by the German legal system but also with the fact that a work-made-for-hire system such as in the US does not exist in Germany. As in such system the writer is bought-out, I understand that the agent wants to ensure that all eventualities are covered. It may also have to do with higher production budgets, more complex financing structures and thus increased securities required by the financiers.

From a distribution perspective, local productions which have received German public funds are bound by German film funding legislation (FFG) which stipulates certain exploitation windows, minimum print requirements and maximum shares of gross receipts for the distributor. These do not apply for international projects and hence there, it is a more objective assessment of the business potential of a film, which may vary from the script phase to the final product, due to both the final product itself and the industry that may have evolved in those 2-3 years.

Often in negotiations there seems to be conflict between getting legally the best deal and closing the deal as quickly as possible to move the project along. How do you handle these situations, what helps to resolve an impasse in negotiations?

I wouldn’t say legally the best deal but rather the safest deal, where all risks are covered. In the end, however, film is a people business and you have to trust that your business partners share the same values and speak the same language when it comes to resolving “difficult” situations. If you are not entirely sure, in the run-up to a closing, do address your concerns internally.

Even if you think you are signing an agreement on the same understanding as the other party, it just so often happens that in hindsight, there are different ways to interpret a clause, and you may both be right. Strangely in such a situation, many avoid the most obvious thing to do: get on the phone, or if possible, meet in person and talk it through. And before you do that, ask yourself: what is essential for you and what can you drop? If you cannot explain why something is essential to you, drop it.

You have a deep interest in content and content development. How do you combine the business needs with creative needs? How would you like to see the film industry evolving to marry these two sides more?

First of all, I think the cliché of creatives having no interest nor insight into the business realities is not true. I have seen more film executives who are reluctant to put themselves in a creative’s shoes, rather than the other way around. It may be true that creatives are not as familiar with the business implications that for example a mere change of location can mean, but when explained, they mostly understand. My personal interest in content development has helped me a lot in negotiations with creatives of all spheres, be it writers, directors, composers, their agents, costume designers, etc. because I argue and reason from their perspective.

What’s next? What you projects are you most excited about?

Being a big fan of SENNA, I can’t wait to see Asif Kapadia’s new oeuvre MARADONA, which we are planning to release next year.