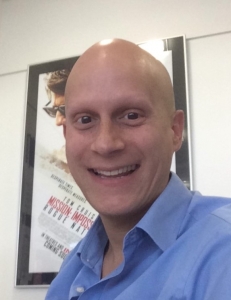 Greg is Executive Director of International Legal and Business Affairs at Paramount Pictures, based in London. He is responsible for the legal work relating to Paramount’s international film acquisitions and the Studio’s theatrical and home media distribution licensing arrangements, with a primary focus on the UK and Ireland, France, Germany and Spain. Greg regularly advises the Studio on European marketing, advertising and data protection regulation and compliance.

Greg joined Paramount from Warner Bros, where he was a commercial lawyer and worked extensively on the development of their state-of-the-art $150 million UK production facility, Leavesden Studios, including the Harry Potter Studio Tour attraction. At Warner, Greg acted as sole counsel to Filmbank Distributors – a leading European non-theatrical distributor (and a Warner joint venture with Sony Pictures and Swank Motion Pictures) – and was responsible for negotiating distribution deals with 20th Century Fox, UIP and Disney, as well as many independent producers and distributors.

Prior to moving in-house, Greg worked for highly respected media and technology law firm, Olswang, where his clients included ITV and the BBC. Greg holds a Master’s degree in Law and Economics from the University of Cambridge.

What do you hope to gain from participating in Inside Pictures? What attracted you to the programme?

I first became aware of Inside Pictures from talking to past participants who raved about the programme and how they’d found it inspiring and enlightening. There were two main elements that attracted me to the course, firstly the opportunity to broaden my understanding of the production and distribution cycles for movies, as my exposure to the film business has been focused particularly on the distributions side; and secondly the chance to interact with and learn from a wide range of people from across the industry, both fellow participants and course leaders/speakers. I’m hoping that when I complete the programme, I’ll have a solid understanding of areas of the film sector that were previously unfamiliar to me and a network of friends and contacts that I can call upon for help and support in the future.

Have there been any highlights so far / what are you looking forward to as the programme continues?

To date I’ve only completed module 1 of Inside Pictures but the fantastic range of speakers and topics discussed in this initial part of the course has more than lived up to my expectations for the programme already! The highlight so far has been meeting and getting to know members of my Inside Pictures cohort who are all so friendly and willing to share their knowledge and expertise. I am very much looking forward to developing my Inside Pictures project with my partner and I can’t wait to get out to LA to experience film business from the other side of the pond!

You work in the European business of a big Hollywood studio, how independent or dependent are the European branches on the decision making of the US headquarters?

I’ve worked for two major studios to date and each has taken a slightly different approach towards their international offices. On the whole my experience is that the Los Angeles head offices of US studios are where all the key big budget film production and company wide strategic decisions are taken, however each of the majors I have worked for afforded their European offices more autonomy in some areas than the others. For example, at one studio the European offices had greater scope/budget to acquire local language/interest films for local distribution only, whilst at the other major the European territories had greater autonomy on distribution strategies and marketing campaigns without the need to align with the US.

For someone thinking about pursuing a career in the studio system, what do you think are key personality traits and skills, which would favour such a career step?

I have found working in Hollywood studios to be a hugely inspiring and rewarding career experience. Individuals working in the studio system will find that they have access to a vast array of resources, talent and know-how which makes the majors a fantastic place to make and distribute movies. However, my advice to people considering a career at a major studio is that they need to be aware that these organisations are massive companies and like any global business they can sometimes be slower to move on making decisions with projects or implementing strategies, as proposals are discussed internally and sign off from stakeholders are obtained. As a result, working in the studio system may sometimes require a bit more patience than I can imagine is required at a smaller indie, and may suit people with a persistence, willingness and drive to navigate established corporate structures and procedures.