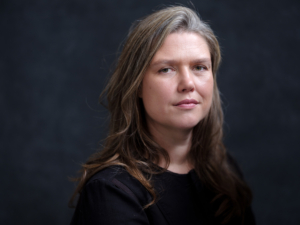 With Viking Film producer Marleen Slot thrives to be a nurturing home for talents from all across the world. Telling stories for audiences to strongly identify with, by filmmakers with whom she is closely connected. Viking Film believes in the power of real cooperations, being that with directors, writers, co-producers, financiers, crew and cast. Only in collectivity we are capable of bringing stories to a different level and attracting audiences from around the globe.

Since its establishment in 2011, Viking Film wants to create high-quality films for both the national and international market with a special focus on arthouse and animation films.

Together with director Mascha Halberstad, Marleen opened the Holy Motion Studio in Arnhem, the day after The Netherlands first lockdown was announced. The 600m2 animation studio is specialized in stop-motion animation and is currently deployed for the shooting of their first feature film, OINK’S REVENGE.

Marleen worked as a producer at Lemming Film for many years. In 2007 she attended the EAVE producer’s training and in 2009 she participated in ACE. In 2013 she was selected Producer on the Move during the Cannes Film Festival. This year she became part of the Inside Pictures family. Besides her work as a producer Marleen sees the importance of actively taking part in (inter)national film policy making. From 2016 until this year she has been chairman of the Netherlands Producers association.

I never went to film school, I am an autodidact – I learned everything myself. However, I do understand the importance to keep developing yourself. I was part of EAVE (2007) and ACE (2009) when I was still young and in the beginning of my career but it was of such great value. I learned a lot on those programmes, and felt that after ten years of Viking Film the timing was right to do IP in 2020.

In 2019 DIRTY GOD was released, which was the first English language film that I produced. This was my first experience of co-producing with the UK. IP’s focuses on English language markets will be of huge benefit because it will help to broaden my understanding even further for the films that I’m currently developing for the UK and US.

Of course it is sad that we can’t all meet in person – that would have been a totally different experience, but I knew about the global pandemic during the interview phase. I felt that in a crazy year of COVID negatives, I should treat IP as a way of gaining some positive experiences. In the sense that it’s incredibly helpful to be sharing our knowledge with each other about how to finance, produce and distribute films in these uncertain times, and consider the future that will follow. And every one of the participants puts in so much effort to get to know each other although we are all stuck behind our computer screen.

What is your relationship like with the filmmakers you work with?

When I started VIKING FILM in 2011, I had big ambitions to make films, but not for managing lots of staff. I keep my company small – it’s only me. I carefully choose the directors I want to work with.

I’m working with Sacha Polak, director of DIRTY GOD (2019), Mascha Halberstad, a stop-motion filmmaker, and the animation trio Job, Joris & Marieke. I’ve worked with all of them almost since the beginning of Viking Film. This year I started working with Sven Bresser. It’s the first time we’ve collaborated, and I’m really looking forward to how that will evolve. I work intensely with each of them and I see our relationship as building for the future. It’s not about one or two films, I really hope to continue working with these people until the end of my producing career. At the same time, I’m not afraid for their careers to take a different path because that will also bring new opportunities.

2020 is a hell of year to open a new animation studio… How would you describe the experience to date?

We began production on OINK’S REVENGE in November 2019 when we were still in a temporary studio. The move to the new, bigger studio was planned for 13th March 2020 – that turned out to be the day after our government announced the lockdown.

It had taken a year to transform 600m2 of old industrial space into an animation studio with Mascha, my co-owner of Holy Motion Studio. The pandemic meant there was no time to enjoy it at first because I was thrust into weekly COVID meetings with from day one – it was very intense.

The experience has taught me that you are only as strong as the most fearful person. You really have to take the fears and anxiety of your team seriously, and anticipate the worst. You can’t sweep it under the carpet, you really need to be there, and listen to what people are saying.

Now COVID is more understood, I’m there only one or two days a week. It’s a beautiful place and it’s encouraging that we could continue producing our animation film. There are 14/15 people working there and I’m pleased that they were not without a job.

I’m really proud of what we’ve achieved, and the progress made on OINK’S REVENGE. We now have around 15 minutes out of 75. It looks amazing. Seeing talented people, doing wonderful animation, in our studio is total happiness.

In an age of sophisticated, almost real CGI, why does stop motion animation still hold an appeal for audiences?

I think it’s about total craftsmanship. The preciseness, and the beauty of the authentic world you’re creating. For me, that is what is always fantastic about stop-motion. I’ve loved it, since I was a child, but more recently, what Wes Anderson is doing with the form is so very special too. Here in the Netherlands, it is not something many people do. We are making the second ever Dutch, stop-motion feature film.

With COVID impacting so much on live action production logistics and safety, I’m glad I decided to produce animation. This means I am not as worried about my job or my company because I can do both

As the former chair of the Netherlands Producer’s Association, what’s been the greatest impact on the Dutch film industry from COVID?

I stepped down after four years as chair on 12th March 2020. During that time, we merged together the film, animation, documentary and interactive producers into one association. It finally happened on my last day. It took a lot of effort balancing Viking Film and chairing the Netherlands Producer’s Association (NAPA). I think if I was still chair, during COVID, and opening the Holy Motion studio, it would have been too much.

Once the lockdown was announced, the most important thing for the NAPA was to get productions back up and running, and ensure there was enough government help for freelancers. Our entire industry relies on the talents and commitment of freelancers. It is important we take care of them during COVID.

What changes do you foresee in your own medium/long term as a result of COVID?

I hope, not so much to be honest. I’m really not good in this online world. I miss meeting up with people. For me, it’s about the feeling and about going to cinemas and shooting without any worries beyond the challenge of making a good film (which is already challenging enough). My next live action shoot isn’t due to start until spring/summer next year. I really hope that things improve by then and that it’s not as complicated as it is now (September 2020). There’s already enough stress from a shoot in normal times.

I’m very proud of everyone who enabled live action sets to be up and working again. It’s amazing, and only really possible because of all the dedicated freelancers who adapted to finding new, safe ways to do their job. I think they’re incredible. That’s the most positive thing for me, seeing how flexible and resilient our industry is.

I put a projector up in my house, and watched films I’d missed over the years. For example, LA GRANDE BELEZZA and UNA MUJER FANTASTICA. Both great films and the parties in LA GRANDE BELEZZA filled me with great joy and made me realize how much I miss a good dance. Last week I saw MANCHESTER BY THE SEA and that was such a beautiful and emotional film. But I truly hope we’ll all be able to be back in cinema’s soon because that experience is irreplaceable.