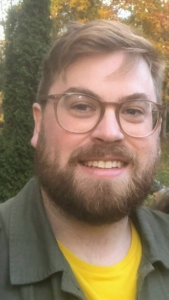 Peter Balm is Head of Business Affairs at the acclaimed independent production company Warp Films. After joining as Business and Commercial Executive in 2012 he was promoted to Head of Business Affairs in 2016. He has served as an Executive Producer on Warp’s upcoming musical film EVERYBODY’S TALKING ABOUT JAMIE (financed by New Regency and Film4), and GHOST STORIES by Andy Nyman and Jeremy Dyson. He is responsible for overseeing all business affairs activities across Warp’s slate of feature films including THE LIFE AND DEATH OF JOHN F DONOVAN by Xavier Dolan, YARDIE by Idris Elba, and TV projects including the BAFTA-winning THIS IS ENGLAND series and THE VIRTUES by Shane Meadows, and Sky Atlantic’s LITTLE BIRDS. He has also worked on BAFTA-nominated THE LAST PANTHERS, SOUTHCLIFFE and ’71.

Peter works with his CEOs & CFO on other aspects of company management including financial and strategic planning.

Prior to joining Warp, Peter started his career working at independent production companies Magic Light Pictures and Corona Pictures. He is a graduate from the Media Business School’s Mega Plus Programme.

In eight years, I’ve learned a lot at Warp, but we do things a certain way, and there are lots of people making TV and film in other ways. I think it’s really important to have an understanding of how different types of productions work, in different production companies, but also different aspects of the business. I think that’s a really important reason for doing IP – being exposed to parts of the value chain, that I wouldn’t normally.

It’s very useful to be doing IP now. It’s probably the perfect time. There’s obviously some annoying downsides, and not being in person with people is not great, not going to LA and things like that, but as a learning opportunity, and having a moment to reflect on things, it’s been really great. To hear from 19 different people, who are going through it, and all the guest speakers, you’re getting a real time, international view of what’s happening in our industry.

What’s some of the challenges taking an IP from stage to the big screen? You did GHOST STORIES (2017), and for 2021’s EVERYBODY’S TALKING ABOUT JAMIE?

They’re slightly different situations. For GHOST STORIES (2017), Andy Nyman and Jeremy Dyson came to us with a film script. It’s their original IP, and Warp partnered with them – bringing our expertise as producers in order to finance and produce the project.

EVERYBODY’S TALKING ABOUT JAMIE (scheduled released is 26 February 2021) is more complicated. The stage play is adapted from a documentary. So, there is documentary IP, and someone’s life rights. WARP came on board when the stage version started out at the Crucible Theatre (Sheffield). As we were trying to sort out that deal, it transferred to the West End. So, it took time for us to get that all together, and make it work, but we managed it.

Financing this Film was a new experience because when it came to the West End, lots of other people wanted the rights that we’d already acquired. Consequently, there were lots of funders wanting to be involved too. It was the first time that we had, not a bidding war, but a choice of different parties we could have gone with.

It’s interesting that on both stage to screen projects you kept the same creative team to do the film version.

That sums up Warp to a certain extent. This ethos comes from joint CEOs Mark Herbert and Peter Carlton. We back talent, and for someone like me, who’s on the business affairs side, it’s important always to remember this factor. It is a key part of our company identity.

What are some of the distinct differences, and what are the commonalities between financiers, broadcasters and talent agents during a negotiation?

In independent film the producer’s commercial position is not always valued as much as other parties involved. My job is to try and protect us as best as we can and get the best position for Warp.

In TV, the UK public service broadcasters have terms of trade, that makes everything much easier, and the producer can hold onto rights. However bigger budget TV series are becoming almost like funding a film. In order to raise the budget you require multiple parties involved, and you have to give away more of your rights as a producer, in order to finance it – fees do move accordingly.

The one commonality between TV and film, for Warp is, we aim to work with these people again. If the talent is good, or we make a successful project, we want to work with them again.

Whilst we need to get the best position for us, we also need to avoid the talent thinking they have a terrible financial deal. This is a relationship business and when one of our CEOs or Execs speak with one of our past collaborators, about a new project, you always want them to feel they have been treated fairly by Warp in order for us to be able to get the deal done on their next project.

We’ve got 10 staff, including a head of production, me and a CFO. Which is why I think people like working with us. They’re not dealing with a single producer, they’re dealing with a company, who manage the entire production process. I know – on GHOST STORIES – that’s something Andy and Jeremy liked because it took away a lot of the stress. To maintain this infrastructure, projects have to be financially viable.

The TV series, LITTLE BIRDS, for Sky (broadcast August 2020), was quite deep into post production, and we had to finish it remotely.

EVERYBODY’S TALKING ABOUT JAMIE was due out October 2020, but that’s put back to February 2021. Pick-ups were delayed. Now that’s done, we can get on with completing post production in time for the release.

Our development team are working on a load of projects to try and move them forward. Some broadcasters have really been supportive of us. So, it’s been quite fruitful time for development.

It’s also been an opportunity to really look at the business and existing IP assets. We have had distribution rights in some of our old projects come back to us in turnaround so we’re working out how we might exploit these rights ourselves.

What lasting effects of COVID might lead to change in Warp’s medium/long term visions and aims?

Some UK broadcasters were badly hit by COVID. Whereas others were less affected; and the streamers got stronger and stronger. It’s made us realise that we need to have a more diverse group of buyers that we work with on a regular basis.

The line between film and TV continues to dissolve. As a film company, Warp is focused on television more and more. The talent wants to work in television. Authors of bestselling novels don’t want to see their work turned into films as much. They want them turned into television series.

We also need to think more about developing productions in other countries, and make sure that we’re plugged into more territories, at least, is probably what we’ve all learned from this.

What positive changes have you’ve seen in response to COVID?

The way everything was able to move online has been really good. For example, Warp managed to deliver the final bits of post-production on LITTLE BIRDS remotely.

What can the UK government do to best serve the film industry during COVID?

The Restart Scheme has been really good for independent producers and has enabled productions to restart or get going. I hope that whilst we are trying to work alongside Covid that the government can keep this type of support avaible.

Me and my wife have been taking it in turns picking different films each night. BIG NIGHT (1996, dir. Stanley Tucci) which I’d never seen before, was amazing.