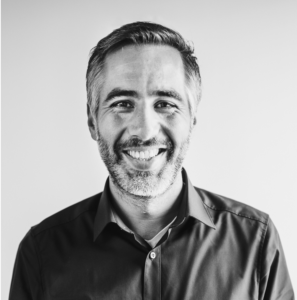 Rusta graduated in Business Administration and from 1995 – 2002 worked in marketing at various film distribution companies (including PolyGram Filmed Entertainment, Universal Pictures, Tobis StudioCanal). He followed this up with positions at Universal Music and McKinsey and – as an extravagant hobby rather than a highly tuned business activity –  even ventured into the grubby charm of Berlin’s arty underground running a bar and venue in the capital. Honing in on film production and expanding his network, in 2004/05 Rusta completed the Atelier/Masterclass Ludwigsburg-Paris and then worked as a freelance producer and later as Head of Production/Finance at Coproduction Office in Berlin, Paris and Copenhagen. Before joining augenschein in 2020, he was Head of Contract Management and Administration at the Hamburg Film Fund (FFHSH) and most recently Head of Business Affairs at the German Film and Television Academy Berlin (DFFB).

Why Inside Pictures (IP)?
I am a very strong believer in serendipity. The more you do, the more things that can happen. In a broad sense, that’s what’s always attracted me to development programmes, like IP.

Max Leo, one of augenschein’s CEOs, did IP in 2017. I joined augenschein at the beginning of 2020. We’ve been using the COVID slowdown to rebuild the company from within: re-evaluating and re-strategizing our structure with a view to making it more robust and effective as a business whilst retaining our commitment to director-driven projects. Talking about that kind of stuff, you need a common frame of reference. Joining 19 other film industry professionals, from a variety of disciplines, and countries, can only inform my understanding of the global market place at this time. That’s the main reason why now, and why IP.

What aspect of the IP programme are you anticipating most?
On top of the chance to grow my business network, I anticipate the project work that fellow participant Kate Glover and I are going to do is what will really impact me most, because it will be the application of all the things that we’ve learned about ourselves, and the film industry, and it will be directly relevant to what I do on a daily basis.

How has being part of IP helped/informed you during a global pandemic?
It does feel strange that you can’t go out in person to a business meet or travel to a festival. And this industry is about meeting people. Technology is great but it cannot always bridge that gap. We are unlikely to return to that pattern of behaviour any time soon. Therefore, doing IP during COVID has been a practical way of testing whether you can get to know people via digital means only. Following the first module we reconvened – over Zoom – just for chit chat basically. It was amazing, coming back to the group, and feeling so familiar with people, after only seeing them for a week on a screen.

I have done job interviews on Skype, but it always seemed harder than going into a room to do the same thing. Now, I feel much more comfortable connecting with others via technology. That’s one aspect, beside the film industry insight, that I’ve already benefitted from.

What in your experience could distributors and producers do more or less of to get the best from each other and their films?
I feel that producers and distributors should be talking to each other much earlier in the filmmaking process. In the development period a producer might get a letter of intent to move a project forward, but they don’t talk about the marketing/exploitation and audience of the film at this stage as much as they should. I’m not saying anything new, but this type of collaboration still isn’t happening enough.

7500 (2020) starring Joseph Gordon-Lewitt, is the archetypal contained thriller, but in the context of COVID restrictions on film production, it is also very producible.
Contained storytelling was a strategic imperative for augenschein before COVID. It fits best with our budget range. It forces us to keep a tight grip on what happens financially, but also creatively too. 7500 is the perfect example of that. In a way, it is a blueprint for how augenschein wishes to operate. Ultimately, developing contained stories means being able to produce more or less single-handedly, and finance them via resources available in Europe. Plus, we want to tell global stories, but we want to be able to shoot them in Europe and work with European filmmakers.

Because of COVID, safety becomes increasingly important. Getting American talent to travel to Europe, now (August 2020), is virtually impossible. If you can tell people: come to Germany, we can control and contain the whole shoot, that might entice them more than a similar budget production shot in multiple, external locations.

What’s been the greatest impact on your company from COVID?
We’ve been very lucky. We weren’t in a production at the time. We weren’t planning to be in production in early 2020.

We are in post-production on STOWAWAY – a sci fi thriller that we shot in 2019 – and Franka Potente’s directorial debut HOME. Much of this has to be done remotely – between the US and Europe. This is technically more challenging but it is possible without too much delay or disruption.

What lasting effects do you anticipate?
We’re gearing up to do ALL RUSSIANS LOVE BIRCH TREES, a smaller-scale production in mid-October (2020).

We’ve built in contingencies for the COVID dangers. Our contracts now have a pandemic force majeure – didn’t have that before it.  But in terms of our overall business, it’s too early to say what will happen. Theatrical, we don’t know but like most production companies nowadays, we don’t rely exclusively on a theatrical release. So, we can look at other options.

As a company we’ve been used to travelling back and forth between the US and Germany for some time now. Every couple of weeks, our producers went out to Los Angeles – that’s obviously not happening at the moment. Existing relationships function effectively online, but in terms of new relationships, I think that’s still quite difficult because, would you marry someone whom you’ve never met in person? You probably wouldn’t. So, we’ll have to see how that pans out while travel restrictions remain in place.

As I said earlier, we’ve used this time to rebuild and restructure. In the end, and I hope it’s true for many, we will come out of COVID, feeling strengthened  from within.

What’s the most innovative change you’ve seen in the film industry in response to COVID?
Emily Gotto (Shudder), an IP participants, told the group about their new film – HOST. It is set entirely on Zoom, and has been conceived, produced and released during the pandemic. I thought the concept and how quickly they moved to get it made, was very innovative.

How do you think your government can best serve the film industry?
It’s very important that governments build funds to hedge against COVID risk because insurance companies aren’t stepping up. If independent production is to continue, then someone needs to back that side of the industry. Otherwise only those with the deepest pockets will produce new films/TV in the most mainstream form possible.

Because many are using the time to think about strategy and what sort of films to make in the future, I think governments should think beyond financial support for specific projects, but also for companies and individuals, rewarding careful business planning, supporting calculated risks and strengthening structures to fare well in these uncertain times. For example, I think it is a mistake that funding for the participation in professional training initiatives is not available as an essential element of industry professionalisation.

If we can’t shoot films, we should be developing them. I believe €200,000 in development has the potential to provide more value to the German film industry, than €200,000 spent on set. Government funding is slowly acknowledging that Development is not only the writer’s story development: it’s packaging, it’s IP development, it’s the whole shebang. I don’t know how it is in Britain, but here, government backed, early stage development money mostly goes to the writers, which is fantastic, but what about the producer, maybe directors, distributors and others who are – or should be – deeply involved in the script stage. This kind of wholistic development funding, that invests in what happens at the earliest stage of a project, could also help bring more professionalism to our industry.

What’s been your lockdown film/tv discovery?
I watched LONG JOHN SILVER (1954) starring Robert Newton with my two small children. Why? We were reading SWALLOWS AND AMAZONS by Arthur Ransome (first published 1930). It’s all about sailing and treasure islands. My children absolutely loved it and started playing pirates. So I said: here’s a pirate film. It’s not the greatest cinema production in the world, but I realised saying, oh, we’re gonna watch this film, because we read this book and then we’re going to make pirate costumes had a great effect in making the event really stand out. This showed me, again, how powerful films can be.

Tell me a fond memory of running a Berlin bar.

My wife and I had just come to the city and we opened the bar to fulfill a  long-hedged dream and new year’s resolution. We did programmed events most nights – open mics, poetry, spoken word, music – and the place became quite a thing amongst the growing international crowd in Berlin at that time. The one thing that sticks with me, is just the way it was possible. Nowadays people have higher expectations of what a bar should be or that starting any business comes with terms such as ‘scalability’ or ‘exit-strategy’. In those days it was different, we had furniture salvaged from the dump, a cellar we transformed into a venue space, and if it was too busy, then we would spill out into the street.