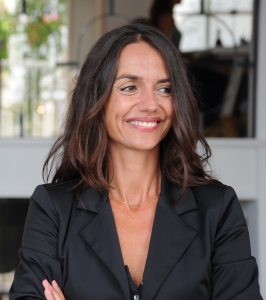 Vanessa Henneman (Amsterdam, 1968) studied Drama in Guildford and Film and Television Sciences at the London Institute and graduated with first class honors in 1993. In The Netherlands she worked for several years as a director and producer at various networks and production companies. During this period, she also studied law at the University of Amsterdam and graduated in 2000, specialized in Entertainment Law.

Vanessa Henneman started her own company Henneman Agency in 2005, which is now one of the leading talent agencies in The Netherlands, representing over 150 prominent actors, writers, directors and composers. Henneman Agency plays a key strategic role in the Dutch entertainment industry. In addition to the standard services as agency, Henneman Agency initiates various new TV, film and theatre projects.

In 2015 Vanessa Henneman initiated a new company in collaboration with two other European agencies: The European Talent Network (ETN).  ETN’s founding fathers Teamplayers (Denmark), Spiel-Kind (Germany) and Henneman Agency (The Netherlands) share a clear vision and strategy to broaden the scope of European talent and to advise and facilitate international producers and casting-directors on talent packaging.

ETN strives to be a ‘One Stop Shop’ for European talent. Talent carefully curated by its partners and associated partners (agencies in the UK, the Balkan, Belgium, Poland etc.). ETN maintains up-to-date knowledge on the current European entertainment industry and through its years of combined experience, ETN knows the value and impact of specific talent.

Vanessa is an EAVE alumnus (2013) and a board member of the European Film Academy, representing the Benelux. Screen International listed her as a Future Leader in 2016.

Inside Pictures felt to be the best place to learn about the current landscape in the rapidly changing international film and TV business. The participants, speakers, tutors, alumni and the people running Inside Pictures are at the top level of the industry thus providing a network of incredible value.

I was very keen to absorb more knowledge during the programme on the numerous finance, production and sales/distribution models and the differences between these models in mainland Europe, UK and US territories. This knowledge is vital to operate on a larger scale and to bring my two companies to the next level.

Already after only half a year, Inside Pictures has provided me with an incredible amount of knowledge and a network of priceless value.  Inside Pictures is the key to almost anybody else in the industry. Say you are Inside Pictures participant or alumni and doors open for you immediately.

Inside Pictures is simply THE place to connect with the best of the best in the film industry.

Besides running your own talent agency, you are also a founding partner of the European Talent Agency. Please tell us more about your collaboration with other talent agencies? What’s the motivation behind it?

European differentiated film markets are growing closer resulting in an increased number of European co-productions and co-productions between European countries and international markets outside Europe. ETN is an ambitious and previously unknown form of multi-market cooperation, gaining this momentum of need. First in it’s kind and therewith aiming to create unprecedented possibilities for talent coming from Europe and also giving possibilities towards talent from low production markets.

ETN strives to create a central meeting point for European talent. It aims to maintain up-to-date information of the current international entertainment industry and provide talent with the contacts necessary to develop and foster an international career as well as help producers across Europe find the right talent for their projects.

ETN already has conquered some position in the Benelux, Germany, Poland, Scandinavia and the Balkan through collaboration with several agents in these territories. In the years to come, it is my goal to put ETN ‘on the map’ in the rest of Europe and beyond. To achieve this it is essential to expand my network further and to gain a better understanding of the worldwide industry and how it develops.

Currently, talent with international ability and ambition are surrounded by a numerous amount of agents covering amounts of territory. Therewith struggling to find consensus in development, workable projects, negotiations etc. Since each European country has its own culture and producing infrastructure, especially when it comes to their respective film industries. I feel the need to share experiences on this field with people working in the industry because I think connectivity should be easier, exposure greater, guidance more unified.

Is there a difference how European talent agencies operate compared to their US counterparts? How do you find working with US agencies especially when you are representing the same client?

European actors, directors and screenwriters are doing well – better all the time. Several highly acclaimed international awards are progressively being picked up by Europeans. Hollywood is shifting its focus towards, and is looking for, new talent in Europe. European and global co-productions are increasingly successful. Great talent is coming out of Europe and the worldwide industry has taken notice. However, talent developed and built in its home territory often ‘disappears’ to the US once Hollywood discovers this talent.

One of the motivations behind ETN is to form a powerhouse for European talent in order to be able to counterbalance the power of the US agents, not by being aggressive but simply by getting more unified.

My experience is that US agents rather exploit European talent instead of building or developing it. Instead of serving producers in order to get their project financed, some US agents tend to think about the pay cheque more than about what is in the interest of the talent or the project.

I believe it’s time for Europeans working in the industry to be more confident and start to act as serious players on the international market. It is not so much what Hollywood can do for us but what we can do for Hollywood.

Where does talent sit in the economy of film in your opinion?

We help producers find the right director, writer and actors for their international projects and this has become our daily business over the last couple of years.

Talent starts with a vision, an original idea, a special gift, and the business side comes later.  What I love about making movies is this peculiar combination of talent and money. Investors are investing a lot of money and they usually and logically only invest to get a good return on this investment. However, no film can be made without talent. And somehow talent doesn’t like or doesn’t seem to perform at its best if we put it in a mould. That is where a lot of friction lies. And that’s where we come in as mediators.