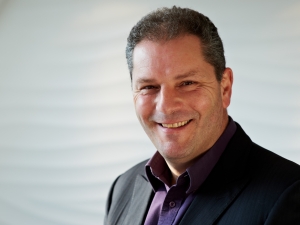 Reno has, for many years, been acknowledged by the industry as one of the leading film and television production lawyers in the UK.

Reno joined Lee & Thompson in the early 1990s where he has built up the Film & Television practice from a near standing start to the market leader it is today. With 22 fee earners, the Group is acknowledged as being the largest team of lawyers in the UK working in the creative audio-visual sector.

Recognised for his extensive experience and ability to manage and close complex deals, Reno has represented producers on over 250 film projects in the last twenty five years. His role has increasingly seen him provide business affairs and commercial advice to producers. Over the last few years Reno has acted as an executive producer on a number of films which include Jonathan Glazer’s acclaimed ‘Under the Skin’ and alongside Martin Scorsese, on Ben Wheatley’s upcoming ‘Free Fire’.

Lee & Thompson is one of the most fervent supporters of Inside Pictures, providing office space to run the programme and hosting an annual alumni reunion. What is it about Inside Pictures that makes it attractive to you for such extensive support? 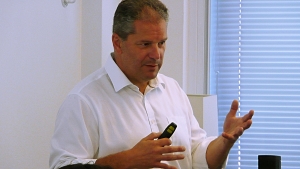 Antoniades speaking to the 2016 IP participants

What sets inside pictures apart from other courses in the industry is the calibre and level at which the participants are already at. This in turn allows the course to teach participants the invaluable skills and knowledge needed to take careers to the next level.

It was the first time this year that you shared your experience and knowledge as a speaker. Can you tell us a little
about that experience?

The participants were visibly receptive and asked some very sensible questions. It felt nice to know that I was being engaged.

As a Managing Partner of many years at Lee & Thompson you would have seen the worst and best of people during a financial closing. Do you have any top tips how to prepare and make this process less painful?

It is essential to have the confidence to know that a deal will close and that every obstacle can be overcome. Most of all a sense of humour is necessary!

Is there a single thing, real or imaginary, which would improve your work life exponentially?

A few clones of myself.