In January, our Alumni (formerly Participants!) completed their final presentations at VUE Piccadilly in front of an array of UK and European Executives. The afternoon was followed by an evening at the Haymarket Hotel, where certificates were presented by Julia Short and Nik Powell. A number of our previous presentations have gone from project to production and we look forward to seeing what happens next. We extend our warmest congratulations to all the Alumni. 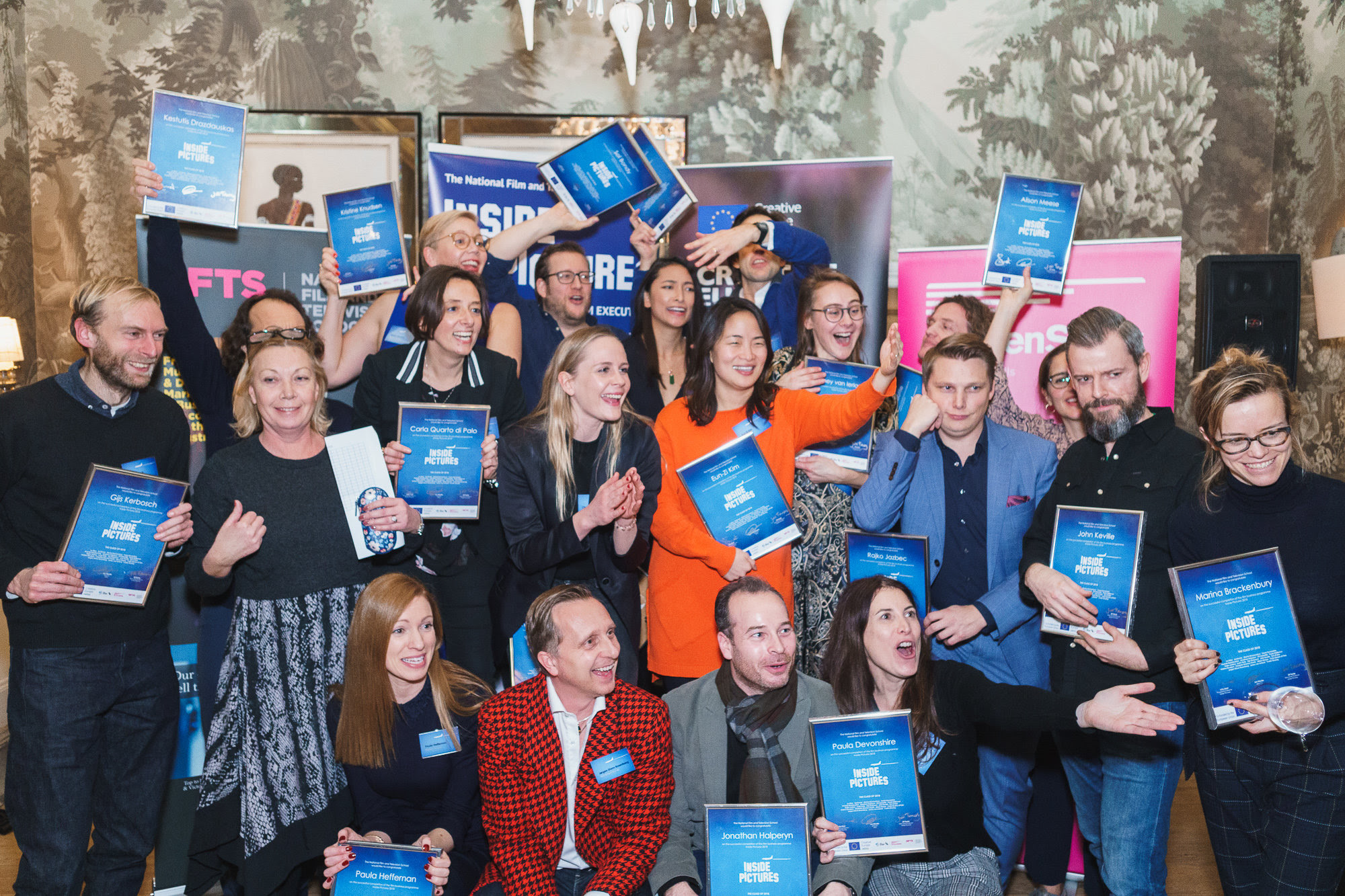 Justin Kelly (class of 2018), Head of Business & Legal Affairs at Hanway, worked on all aspects of the finance and sales of Lone Scherfig’s THE KINDNESS OF STRANGERS, which will be opening this year’s Berlin Film Festival! The films takes us to New York City for a moving tale about hope, forgiveness and love. Read more.
Katie Holly (class of 2011) of Blinder Films is the producer of A DOG CALLED MONEY, which will celebrate its World Premiere in the Berlinale’s Panorama section. This documentary is a uniquely intimate journey through the inspiration, writing and recording of a PJ Harvey record. Katie also produced the drama EXTRA ORDINARY (directors Mike Ahern, Enda Loughman), set in rural Ireland, which is selected for the Narrative Competition at SXSW 2019. Read more.
Alexandra Hoesdorff (class of 2017) of Deal Productions is one of the lead producers of FLATLAND by Jenna Bass, which will open this year’s Berlinale Panorama section. The film leads us into the world of lonely, middle-age policewoman Beauty Cuba whose life changes forever when she receives a call for help from Billy, the lost love of her life who has recently been re-arrested for murder. Read more. 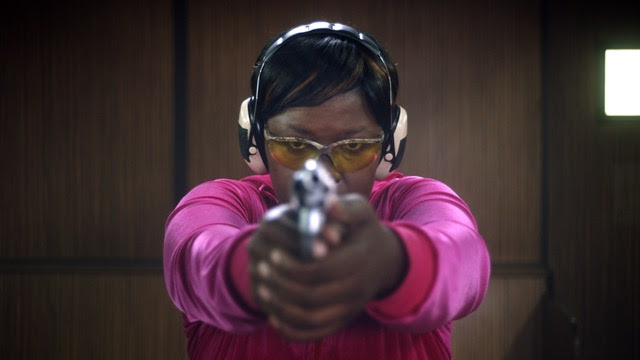 FLATLAND (Dir: Jenna Bass), produced by Alexandra Hoesdorff and others

Davide Nardini’s (class of 2017)‘s PIRANHAS was selected for the Competition section of the Berlinale. Davide served as producer and oversaw of all aspects of the film’s international operations and activities. This coming-of-age drama, directed by Claudio Giovannesi, is set in Naples and tells the story of Nicola and his friends who ride around the city to take power in the district of Sanità, showing no fear of prison or death. Read more.

Alexander Glehr’s (class of 2012) THE GROUND BENEATH MY FEET will be premiered in Berlinale Competition 2019. The film centers on high-powered business consultant Lola, who controls her personal life with the same ruthless efficiency she uses to optimize profits in her job. Alexander, who has recently took over Novotny & Novotny Filmproduktion, produced  this drama. Read more.

Lucy Wainright (class of 2003) of Raindog Films served as executive producer for OFFICIAL SECRETS, starring Keira Knightley and Ralph Fiennes, which premiered in Sundance. This drama tells the true story of British intelligence whistleblower Katharine Gun, who prior to the 2003 Iraq Invasion leaked a top-secret NSA memo exposing a joint US-UK illegal spying operation against members of the UN Security Council. Read more.

Michael Frenschkowski‘s (class of 2016) environmental documentary SEA OF SHADOWS, directed by Richard Ladkani, won the Audience Award of the World Documentary Section in Sundance. Terra Mater Factual Studios, where Michael is Head of Features, also closed a worldwide deal with National Geographic for this film, which is now travelling to other festivals, among them Copenhagen and Graz/Austria. SEA OF SHADOWS is exec-produced by Leonardo di Caprio. Read more. 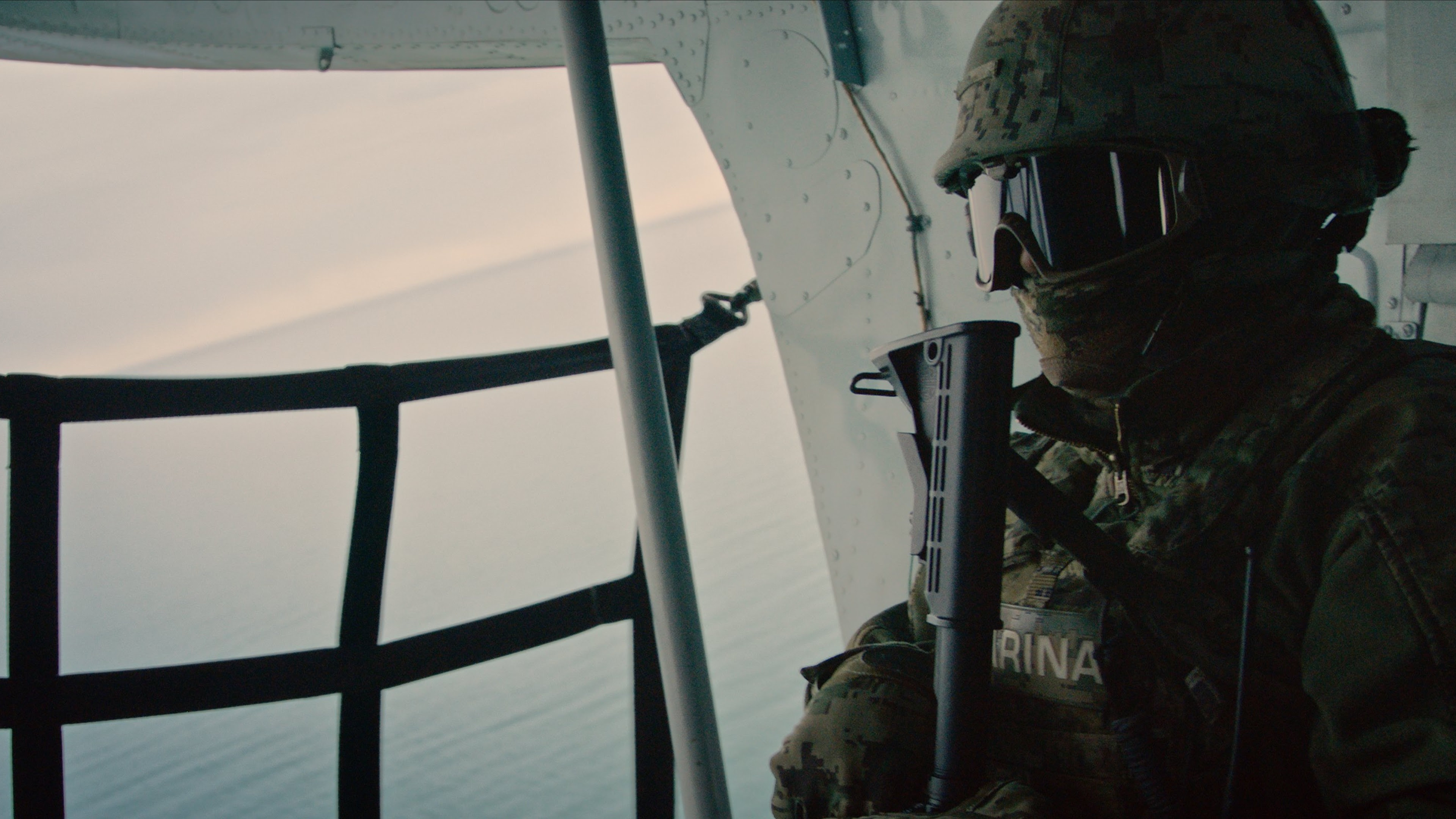 Lee Thomas (class of 2005/06) is the producer of THE LAST TREE which was presented at the opening night film of the World dramatic competition at Sundance. Directed and written by Shola Amoo, the drama stars predominately young, black British actors and follows the story of Femi, a British boy of Nigerian heritage who, after a happy childhood in rural Lincolnshire, moves to inner London and struggles with the unfamiliar culture and values of his new environment. Read more.
Piers Tempest (class of 2007), produced THE WIFE, starring Glenn Close, which has been enjoying great success this awards season winning The Golden Globe, Critics Choice and SAG Award for Best Actress for outstanding performance. Glenn Close is also nominated in the Best actress category for the 2019 BAFTA’s and in the Academy Awards. Read more.
Paula Heffernan (class of 2018), Head of Productions at Element Pictures, and Mark Byrne (class of 2013), Head of Business Affairs at Mark Byrne Group, have participated in the production of THE FAVOURITE, which has been nominated for ten Academy Awards including Best Picture, Best Director, Best Original Screenplay and Best Actress. This is Element Picture’s second best picture nomination at the Oscars, following their nomination for ROOM three years ago. THE FAVOURITE, directed by Yorgos Lanthimos and starring Olivia Colman, Rachel Weisz, and Emma Stone, has also been nominated for 12 BAFTAs. Read more.
Peter Ettedgui (class of 2007), writer, co-director and executive producer on MCQUEEN, is happy to announce that the documentary about the British designer has been nominated for two BAFTAs, Outstanding British Film and Best Documentary. The film depicts the life and career of fashion designer Lee Alexander McQueen, from his start as a tailor, to launching and overseeing his eponymous line, and his untimely death. Patrick Fischer (class of 2015)  also served as executive producer and his company Creativity Capital fully financed the film. Read more. 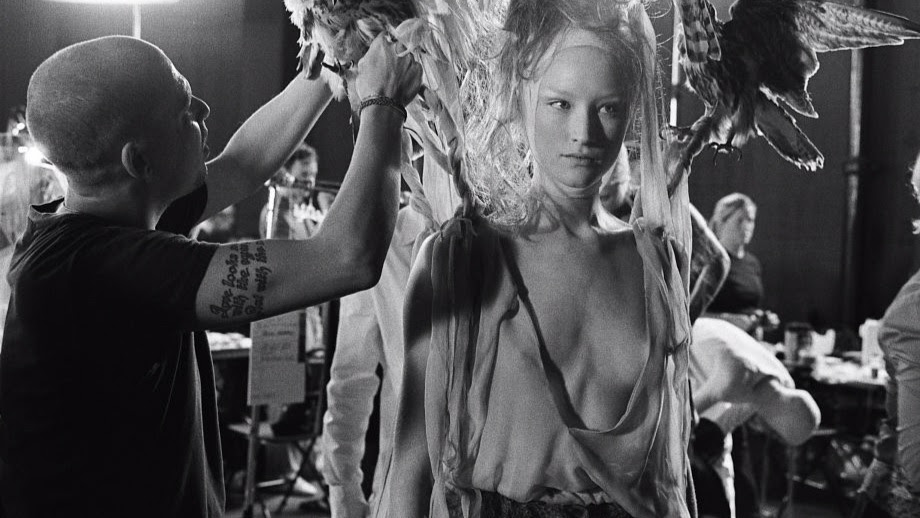 Leon Clarance (class of 2011) produced THE BIRD CATCHER which sees its world Premiere at the Santa Barbara IFF. The drama depicts a Norwegian Jewish teenager who dreams of Hollywood stardom suddenly is faced with playing the role of her life, masquerading as boy on a Nazi occupied farm plotting her escape to Sweden and survival. Read more.

Christopher Granier-Deferre (class of 2010) produced SCARBOROUGH, starring Jessica Barden and directed by Barnaby Southcombe, which premiered at the Warsaw Film Festival and won Best Screenplay at Macao Film Festival. Set in the once glamorous Scarborough hotel, away from prying eyes, two couples laugh, quarrel, and make love as they come to terms with the impossibility of their forbidden love. At barely 16 years old, two of them are still at school and the others are their teachers. Read more.

Ivy Vanhaecke (class of 2015) served as executive producer on the TV series UNDERCOVER, which has been nominated for the Cinequest Film Festival, taking place in San Jose, California. In 2018, the series premiered at Canneseries, where it was presented in the official competition. UNDERCOVER also received the Audience Award at the Seriencamp Festival in Munich. The series tells the fictional story of one of the largest ecstasy producers in the world. Read more.

Xavier Granada (class of 2015) served as producer of JEAN-FRANCOIS AND THE MEANING OF LIFE for A Contraluz Films, written and directed by Sergi Portabella. This coming-of age road movie about a boy who longs to meet Camus in Paris and find the meaning of life, has been nominated as Best Film and Best Original Music at the Gaudí Awards by the Catalan Film Academy, after premiering in Moscow Film Festival 2018 and having received the Best Director and Best Original Music Awards at Cinespaña Film Festival. See the trailer here. 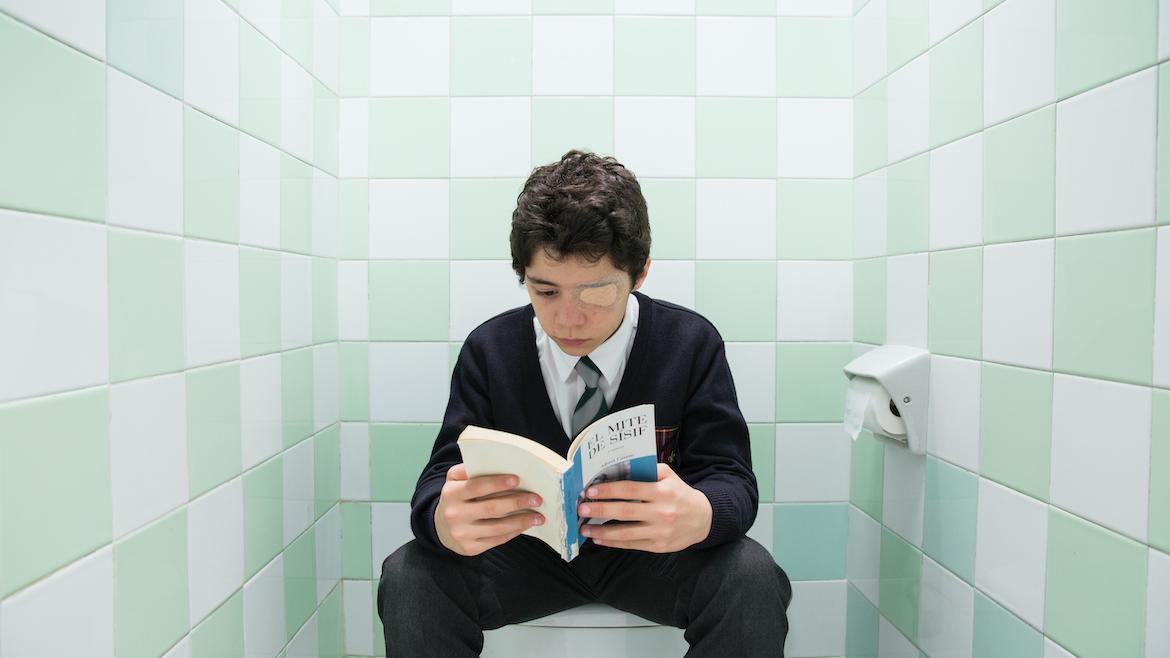 JEAN-FRANCOIS AND THE MEANING OF LIFE (Dir: Sergi Portabella), produced by Xavier Granada

Siniša Juričić‘s (class of 2015) animation film CHRIS THE SWISS is nominated for Best Foreign Film at the French Lumières TV awards. Siniša is also a producer on  DEAD & BEAUTIFUL by David Verbeek in March which will be shot in March, which Leontine Petit (class of 2017) being one of the lead producers on this film. Also, the shooting of yet another feature film is in full swing, the upscale horror film MOTEL ACADIA by Malaysian director Bradley Liew. Set in a fictional snowy United States, the film is about a young Filipino man who is groomed by his tyrannical Caucasian Father to take over Motel Acacia which is tasked with exterminating immigrants by the government. Read more.
Anna Różalska (class of 2012) served as co-producer of the documentary WHO WILL WRITE OUR HISTORY, which was presented at the UNESCO Headquarters on the occasion of International Day of Commemoration in Memory of the Victims of the Holocaust in January. The film, directed by Roberta Grossman and Nancy Spielberg, was broadcast in a global event at over 300 venues. It tells the story of the clandestine group Oyneg Shabes, formed in the Warsaw Ghetto from where it collected thousands of testimonies, creating a documentary record of the wartime fate of Polish Jewry.  Read more.

Paula Devonshire’s (class of 2018) drama INDIAN HORSE was the highest grossing Canadian film in 2018. Congratulations! Also, MERSEA, the project that Paula pitched at Inside Pictures, has been chosen by the Frontières Finance & Packaging Forum in Helsinki, which annually selects 12 projects in advanced financing & development to work with industry leaders from February 14-16 in Helsinki, Finland. The fantasy drama about love, age and beauty is produced by Paula’s Devonshire Productions and Paul Scherzer of Six Island Productions. Read more.

Helena Danielsson’s (class of 2014) Swedish production company Brain Academy, has brought two upcoming features to this year’s Goteborg FF: The thriller THE PERFECT PATIENT, directed by Oscar nominated Mikael Håfström and currently in post-production, was presented at the Works In Progress section; and THE GIRLFRIEND, directed by Jane Magnusson, which also participated in Rotterdam’s financing and co-production market, CineMart, this year. Read more.

A selection of highlights from talent represented by Vanessa Henneman’s (class of 2016) European Talent Network & Henneman Agency include actors Gijs Blom and Yorick van Wageningen who landed a role in the new Netflix Original series THE LETTER FOR THE KING; director Steven Wouterlood who is announced one of ten Europeans To Watch by Variety Magazine; Philipp Christopher & David Sakurai feature in Youtube Red’s first original series ORIGIN while Vinzenz Kiefer has joined a.o. Ben Foster and Michael Caine on the set of Petr Jákl’s new feature MEDIEVAL. Read more.

Fellow Inside Pictures alumni Rhodri Thomas (class of 2007) and Alexei Boltho (class of 2005) have launched their new production company, RAY Pictures. The London and Los Angeles company will develop, finance and produce feature fils and television shows and its backers include Endeavor Content. Read more.
Luane Gauer (class of 2016) was promoted to Director, Acquisitions & Co-Productions at Focus Features and has recently moved from London to Los Angeles.
Krista Wegener (class of 2007) was promoted to EVP, Sales and Distribution at Participant Media. Before Participant, Krista worked for Miramax and Momentum Pictures.
Simon Gillis (class of 2014) was just promoted to COO of Film at See-Saw Films. The production outfit has offices in the UK, Australia and in the US. Simon will also serve as executive producer on See-Saw’s forthcoming feature film slate, including Francis Lee’s Ammonite, which starts shooting next month. Simon joined See-Saw in 2016 as Head of Commercial Affairs, after previous business affairs roles at Universal Pictures, Disney and BBC Films.
Pangea2019-02-20T13:56:23+00:00February 20th, 2019|