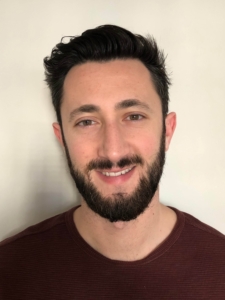 Adam began his career as a freelance writer in 2013. It was at this time his first script was produced for a non-broadcast pilot by Tiger Aspect Productions. He then wrote and executive produced a short-film that was selected for 15 festivals around the world.

In 2017 Adam joined Fulwell 73 where he has been developing projects at all stages from concept to commission for both digital streamers (including Netflix, Disney+ and Quibi) and traditional broadcast media (like the BBC and ITV). Adam is now heading up a development team that focuses exclusively on music and sports documentaries.

Most of my experience has been on the creative side. I was looking for something that would teach me more about the commercial side of the industry. My line manager suggested I look at IP, He said it’s the best course in the business and he was right. There really isn’t anything else like it.

How has the IP experience helped/informed you during the global pandemic?

The thing that everyone says about IP, is that the LA module is unbelievable. The closest we get to LA is changing our backgrounds on Zoom. The more I let that go, the more I’ve come to see that the real value of IP is the people in your group. It’s phenomenal being able to talk to this incredibly talented cohort of people and learn from, and with them – sharing this unique experience of working through a pandemic. Plus, the ability to grow your network at this time is an incredible opportunity.

How does experience developing scripted work inform your work in documentaries?

There is huge crossover between scripted and non-scripted. Especially in developing access documentaries where you are often asked to write out a potential series structure. How do you pick the standout characters? What will happen to them in six months? Creative writing.

That’s really where a background in scripted materials and creative writing comes into play, because there’s no way of knowing what’s going to happen behind the scenes at a places/organisation that you’ve never been to. On one project, the commissioners said they couldn’t wait to meet Sheila. I had to explain that Sheila did not exist, but someone like her will.

In access documentaries it’s impossible to predict the standout characters but they are always there because real people are brilliant. In ALL OR NOTHING: MANCHESTER CITY, for all the star power on display, it was the kitman whose character and passion stood out. Those kinds of characters make a football-led story, not about football, but about people.

What is the difference between developing for streamers vs traditional broadcasters?

In a way, developing for broadcasters is simpler because each channel has it’s own established identities and traditions. It’s far easier to identify the difference between a BBC & ITV show than a Netflix & Amazon show. The biggest difference is streamers are actively evolving, jostling for space, reacting and adapting to new data. Where broadcasters are very clear and defined, streamers are forever redefining their purpose/content demands.

Broadcasters, on the other hand, have a clear identity. You come up with a concept for a series, and it’s immediately clear if it’s for Channel 4 or SKY. Whereas for the streamers, what makes something a HULU show as opposed to a Prime show. On the flip side that means there are more avenues for content, more opportunities for content makers. That jostle for space, and for identity makes things creatively exciting.

How do you develop a music documentary?

By thinking about something other than music. We’re always looking beyond the headline. It has to be more than a concert film, more than a highlights reel, about more than the music. It has to tap into something that’s more human.

The best example in Fulwell’s back catalogue is BROS: AFTER THE SCREAMING STOPS (2018), directors Joe Pearlman and David Soutar did an incredible job unearthing a human story about brothers, fame and overcoming family drama.

Exploring which human theme connects with the band’s narrative best is the key. Also, access. No point having the idea if you can’t successfully get the band on board.

What’s been the greatest impact on your team from COVID?

The greatest impact has been on the youngest members of the team. We’ve got two Junior researchers in our team. This is a time in their careers where we’re meant to be with them, teaching them. The challenge for us as managers, and as leaders, has been to figure out how to not slow their progress and keep them engaged. We now have a daily call with the team to help set the day off right and get everyone moving with the right priorities, so they aren’t just left to work it out by themselves.

On a positive note, we’ve been able to dedicate even more time to development. For example, the musicians, who were busy with ongoing recording/touring commitments are at home, with time to spare.

What was your lockdown film/tv discovery?

I saw PEANUT BUTTER FALCON (2019) and I cannot stop recommending it to people. It’s one of those films that I wish I’d made.

The mini-series UNORTHODOX (2020. In 2015 I was developing a project based on Reva Mann’s book THE RABBI’S DAUGHTER – also a true story. When I saw UNORTHODOX it was a relief, or maybe vindication, that I’d always believed in that type of a project. The idea that the Yiddish language could translate to a wider audience; and what we think of as niche is becoming more accessible to the mainstream.