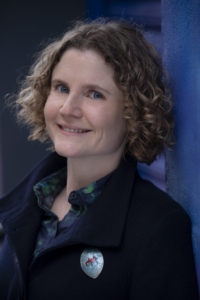 Ailish has worked across some of the most critically acclaimed TV shows in Ireland in the past three years, establishing her company Deadpan Pictures as the comedy drama production company in Ireland. Since forming Deadpan Pictures with partner Paul Donovan in 2014 she has produced the TV series; Women on the Verge for UKTV and RTE (Sky Vision selling), Can’t Cope Won’t Cope for RTE (picked up by Netflix and BBC), Nowhere Fast for RTE (BBC Studios selling), Hardy Bucks for RTE (picked up by Netflix) and is currently in production on Dead Still, a six by one hour comedy drama for Acorn TV and RTE, in co-production with Shaftsbury. On the feature film side Ailish has produced Conor McDermottoroe’s Halal Daddy, starring Colm Meaney, Art Malik, Sarah Bolger and Nikesh Patel, Deadpan’s debut feature in 2017 which premiered at Edinburgh IFF 2017.  She is Exec-Producing Aoife Crehan’s The Last Right, which is currently in post-production.

Prior to establishing Deadpan Pictures Ailish was Head of Production and producer for Grand Pictures, while there she co-produced three features, The Race, Wide Open Spaces and Situations Vacant as well as co-producing four television series during her tenure.

She is a graduate of TransAtlantic Partners 2013,  Eave 2007 and holds a diploma from UCLA in Film Development and a B.Sc. in Film and Broadcasting from DIT. She was a founding board member of the Irish Chapter of Women in Film and Television

What attracted you to the Inside Pictures programme? What’s your impression so far? The reputation of Inside Pictures was the biggest draw. The calibre of speakers and previous alumni of the programme offer a wonderful opportunity for network building.  The programme offers a unique platform for international producers to gain further insight into the US market.  So far the programme has delivered beyond my expectations providing open and honest access to leaders across all sections of the industry, both in terms of speakers and fellow participants.

Comedy is often considered a hard genre to export, especially if it is laden with cultural references. What is your experience and how do you make sure that your TV series and films are funny around the world? Any territories where your brand of comedy works particularly well? In our experience the local can be the universal. The more authentic a story and world is the more it travels. If you’re reflecting an experience that’s uniquely Irish you can rest assured it’s a human experience that’s shared in other places. In terms of accessing other markets the comedy drama element is the key – therefore the series will travel with the narrative drama element, even for those who may not fully appreciate all the comedy aspects.  All our content, both TV and film, is character-driven. This allows the local to become the universal in that it’s all human experience and once it is authentic it will connect with local and international audiences alike.  We found this is particularly the case with our darkly comic drama, Can’t Cope Won’t Cope.  We received emails and tweets from all over the world when it launched on Netflix.

Territories wise we are in the strong position of being English speaking, with a very large diaspora in some key territories. The UK, US, Australia and New Zealand have responded well to our TV and film output. With numerous glowing reviews for our TV shows in particular in the New York Times. Germany has also been an important territory for us, we’ve had theatrical releases for three of our feature films there to date. We are excited to do our first Nordic co-production this year, a TV series co-production with Norway.  We hope that will expand the market for our content into this region.

You co-produce often on your TV series. What makes a good co-production partner? Apart from raising finance, what is the biggest benefit of co-producing? Sometimes it’s as simple as creative needs and story requirements, other times it’s financially driven. As an Irish producer we have always collaborated as given the territory size it’s unfeasible to make feature films out of Ireland alone.  While we have attractive tax incentives and a strong and supportive agency in Screen Ireland, the market is so small that it’s important to partner with international coproduces to finance any projects of scale. All of the films I’ve produced or worked on to date have been coproductions, we have worked a lot with Germany and more recently Canada. The UK has been a natural coproduction partner over the past decade and we hope, Brexit aside, that it will continue to be.

In terms of finding the right co-producer we are looking for a  partner with an understanding of the creative core of the project and the support required. One of the key advantages of co-producing is that we have an international perspective on the project from the outset. A different cultural opinion; usually if our story works for our co-producer we know that it has the potential to travel well.  It also opens up a second or sometimes third domestic market for the film/ TV series.

You have worked across film and TV, how does the process differ? What is it about film that you like and what is it about TV? What are the limitations? From a practical point of view there’s something very satisfying about the speed of TV, there’s a very clear route to market. Film will always be that intersection of art meeting commerce and when it works the rewards are great but the success hit rate in film is definitely more difficult. Historically I would have thought that creatively film is the more fulfilling, as you have a longer lead in time to finesse and hone the material, but this is changing as the industries merge, talent cross-over and platforms and markets now view them as content rather than two defined sectors.  We feel in a very advantageous position in that we’ve a successful TV production arm from which talent cross pollinates with our film output.

What are you working on at the moment, what can we look forward to and where and when can we see it? Next up on the Deadpan slate is Aoife Crehan’s debut feature The Last Right, starring Miciel Huisman, Niamh Algar, Samuel Bottomley and Colm Meaney. Currently in post production EOne will be releasing it in Ireland and UK later this year, Seville International (AKA Wasabi) are handling world sales.  This feature is a co-production with UK CrossDay Productions and Moonlight Bay Films. On our TV slate we’re in post production on John Morton’s Dead Still, starring Michael Smiley, Kerr Logan, Eileen O’Higgins. Set in 1880s Ireland in the Victorian era heyday of ‘postmortem photography’ the six-episode period drama follows a renowned memorial photographer as he investigates the murders of his recently deceased subjects. The series is an RTE and Acorn TV co-commission and a co-production with Shaftesbury Films in Canada. ZDF Enterprises are handling international sales. The series will be broadcast in early 2020.

Also on the TV slate we’re in final stage of pre production on another six X one hour comedy drama series for RTE, Acorn TV and TV2 Norway. The South Westerlies is written by Catherine Maher. When a small town on the south-west coast of Ireland, is earmarked for a Norwegian-owned wind farm, it’s not just the spectacular scenery that’s under pressure. Principal photography will commence in mid September and the series will TX Spring 2020. ZDF Enterprises are handling international sales. That’s what’s keeping me out of mischief at the moment…