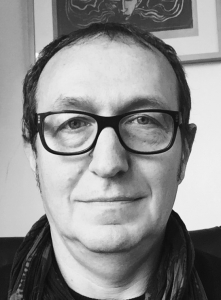 Antoine Simkine is lead producer and managing director of the Paris based Les Films d’Antoine which was founded in 2004. He has over 30 years of experience in the industry. After working as First AD and line producer, he co-founded in 1989 DUBOI that he managed until 2002 and was the executive producer of the VFX of about one hundred feature films such as THE CITY OF LOST CHILDREN, AMELIE, ALIEN RESURRECTION by Jean-Pierre Jeunet, THE NINTH GATE by Roman Polanski, RONIN by John Frankenheimer, JOAN OF ARC by Luc Besson, THE MAN WHO CRIED by Sally Potter. Antoine Simkine has then worked for 20th Century Fox as VFX producer during the final phase of development of I ROBOT by Alex Proyas.

As a producer for Les Films d’Antoine, he has produced or coproduced ten feature films that where presented in Berlin, Sundance, Toronto, Karlovy Vary. Most recently, THE SUMMER OF SANGAILE by Alanté Kavaïté received the Directing Award in Sundance 2015, then went to the Panorama section of the Berlinale before being release in over 20 territories and participated in over 80 festivals where it has received numerous awards.

Antoine has founded in 2013 Digifilm Corporation, a start-up offering an innovative solution for the long-term archival of film assets.

Antoine has participated in ACE, EAVE+ and INSIDE PICTURES, he is a member of the European Producer’s Club, the EFA and the Cesars.

While I was trying to come on board as a co-producer on a film that Conor Barry was producing, I realised I don’t understand the mechanics of the financing anymore the moment a US sale agent came on board. The whole deal was different from my usual practice. Then, Raymond van der Kaij recommended Inside Pictures to me as well so I thought that it was time for me to join. When I started to look at the alumni list and met some of the participants at the Berlin reception, it became clear that this had to be my next training programme.

What’s your impression of the programme so far? How was Los Angeles?

We really go through a 360° analysis of the industry. What I really like is that our group is composed half of producers and half of people involved in other parts of the industry and who we usually don’t hang out with so much. We learn a lot from each other and it is really great that both sides get a better understanding of what each other’s business is about. Los Angeles was quite amazing, getting such good introductions to Netflix, Amazon, studios, managers, agents, lawyers etc. is very helpful as this industry is a lot about trust and networking.

From outside of France, we look with envy at the French Arthouse film landscape – the support you get from public bodies and the size of your audiences. What does it look like from the inside?

We are extremely privileged with our system and when I see for example the amount of money that is spent with lawyers in the rest of the world, while we don’t even need to negotiate a contract with Canal+ for example as it’s an industry standard, it’s fantastic. We have a complex setup that cleverly protects our cinema and the result is a bigger market share of national films than in most other countries. However, if you are trying to make films that are outside of the scope that our system is designed for – a majority of comedies and social dramas – it becomes more difficult. And for foreign language films, we have a small grant from the CNC that is designed for the world cinema, not at all for middle range EU films.

What are the biggest challenges producers are facing currently? Have developments like the implementation of the Digital Single Market any impact on your work going forward?

The French system relies a lot on TV presales and the fact that Cinema is not such an attractive offer to TV viewers with the advent of VOD is going to radically change our landscape. How long will we manage to keep the obligations of our TVs and what will replace that, nobody knows yet. The blind tentative of implementation of the Digital Single Market would have been a disaster if we had not managed to get ourselves heard by the commission. No frontiers means no secondary market and no segmented pre-sales, a simple concept for us but that seem to be difficult to understand from the point of view of technocrats who just want to see their national football match when they are staying in Brussels. Now, we also have to think further about the DSM and try to figure out how it could become an opportunity for independent producers facing a major problem with theatrical distribution. Would it make sense to have a EU VOD/SVOD network financing and showing art-house cinema outside of multiplexes? Maybe.

You have worked on many landmark French films in the past and had a stint at a major studio – what lessons did you learn on these productions, which keep serving  you well in your work as an independent producer?

I decided to make the move to become an independent producer after looking back at the hundred films or so I had been involved with and thinking that there were really only a handful of them that I was fond of. I boldly thought that I could produce better films, but at the time, I really had no idea of what it was to actually produce a film. I realized then that from my window of the post-production world, I knew very well how to handle the physical production of a movie, but that it really has little to do with actually producing which goes way beyond the actual making of a film. I’ve now produced or coproduced about ten films and have gained a lot of experience (read: made mistakes) and realize that it’s a never ending learning curve and that’s probably what I like most. On each film you discover stuff that surprises you, things you don’t expect. Nevertheless, knowing the ins and out of physical production can really improve the quality of films as in the world of indie production, you can’t throw money at problem to solve them, you have to be creative.

While I’m looking at how to make international movies, I’m currently developing a couple of French language films. Alanté Kavaïté’s third feature CORPORE SANOWHICH is actually my work project and TOI D’ABORD by Emilie Deleuze, a rom-com set in the world of the street art. I’m trying to finance A STORM CALLED ROCK, a mock-rockumentary by Jan Kounen about the real history of Rock & Roll and I’m finishing a documentary called MR GAY SYRIA by Ayse Toprak about the situation of the gay community in the Middle East with a focus on Syrian refugees.