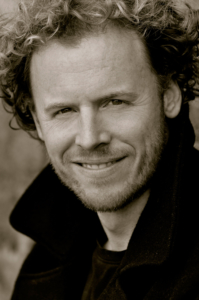 Arno is in charge of operations at Sampsonic Media and heads the development of the in-house film projects, notably book-adaptations THE HUSBAND SWAP and A SHORT STAY IN HELL.

He delivered Sampsonic’s feature film BEHIND THE
MIRROR to distributor Random Media, who released the film through The Orchard.

Arno wrote, produced and directed the feature film OLIVIA TWIST, which has been distributed by Under The Milky Way and released on iTunes, Amazon and Google Play.

As a stuntman, Arno performed in more than fifteen feature films, including BLACK BOOK by director Paul Verhoeven and GEORGE AND THE DRAGON with Patrick Swayze and Val Kilmer.

Gaining a trusted group of peers is something that I definitely had in mind when I applied. The speakers are all very experienced people from across the film industry. To be able to draw on their knowledge and learn from them is amazing. And then to be able to approach them later with projects… This would take much longer to establish in normal circumstances.

There is also the reputation and prestige of IP – becoming part of this wider IP family attracted me for sure. One of the speakers did IP four years ago, I think. He said his group are still very much in touch with each other. It’s great to hear that it works like that. I think it’s instilled as a principal of the course for the people who run IP.

How has IP, coming together with 19 other participants, helped or informed you during the global pandemic?

Because we come to IP from different countries, companies and roles, you do get a more realistic picture of the industry-wide impact of COVID. I think if you’re a producer, and you’re interested in doing co-productions, then it’s massively useful to know what it’s actually like, say, in Germany, but also for me, I can share what it’s like in Canada, Cyprus and the UK.

You’re in West Canada, SAMPSONIC MEDIA’s base is in Cyprus, even before COVID you must’ve been comfortable with remote working.

Yes, I’m very used to working remotely. However, in any given year, Nicolas Sampson, CEO of the company, would come to North America to meet up and explore opportunities. In addition, I would travel to London and Continental Europe a few times a year. During COVID we’re operating 100% remote. It is more challenging, but such is the new norm.

How would you describe SAMPSONIC MEDIA’s process for finding/choosing new projects to add to their slate?

There are three levels.

You’re one of the screenwriters adapting the book THE HUSBAND SWAP by Louisa Leontiades.  What have been the main storytelling challenges?

THE HUSBAND SWAP is a daring drama-comedy that is set in the world of polyamory. I want to ensure I echo how the book sensitively portrays the subject of polyamory – a complex relationship approach that comes with its own unique joys and challenges.

The author lives this life, so the source material is her memoir. Being faithful to the book while doing what is most dramatic is an ongoing mission. We consult with Louisa, as we want to respect her story, but at the same time, thankfully, she accepts that not everything she wrote will make it to screen.

What lasting effects of COVID will lead to a change in your medium/long term visions and aims?

It seems like feature films, as a theatrical medium, will become increasingly limited to the big studio films and/or the prestige dramas (released during the awards season). Everything else will most likely struggle to find a way into cinemas. It’s not impossible, but it seems a riskier strategy for indie producers. At the same time, the rise of the streamers has been accelerating. Netflix and Amazon are very much established, but Apple TV+, HBO Max and Disney+ have all launched in 2019/2020. This growth has coincided with a global pandemic where people couldn’t leave their homes. Many have taken out subscriptions to services they wouldn’t have done in normal circumstances. This sudden take up accelerates this paradigm shift.

Previously, when talking to producers about where they saw their movie, they’d say: festival circuit, cinemas, streamers… and then to broadcasters, but nowadays, it is much more compartmentalised. I think that will become the new standard. There’ll still be plenty of opportunity to produce great stories, but I think you have to become more focused on how you see your movie reaching an audience.

I think the resilience and adaptability of people in our industry has been remarkable. I mean, we are, by nature, problem solvers and opportunity seekers – the current situation demands that. I see a lot of people stepping up and that’s really encouraging. For example, Virtual Cannes was a success. Reports in the trades confirm the sales companies and the buyers were really happy with the way it went and how much business was done.

How well do you think your government has served the film industry during the COVID?

I think it’s worth noting, especially in British Columbia, how transparent and communicative the provincial government has been, on a daily basis. The openness is really important for the producers. They know exactly how to adapt; what to implement, what not to etc. It just makes it so much more efficient/safe in terms of productions. You trust they’re trying to do the best possible job for you.

THE MORNING SHOW on Apple TV+ with Reese Witherspoon and Jennifer Aniston, and the hilarious Billy Crudup. Such an ingeniously crafted story.

Finally… Please tell us a story about being a stuntman.

I liked doing fire stunts the most. The experience can be very Zen. This is because when you’re surrounded by flames everything becomes really quiet on the inside, and your only focus is on the rehearsed moves that get you to safety – there’s a peacefulness during these moments when you’re on fire. In one movie, I was a serial killer chasing somebody through a ventilation shaft. The hero uses hairspray and a lighter to fend me off. So now I’m on fire, crawling for the exit point… There’s only one way in, and one way out – take the wrong turn, and I might burn for too long. That gave the performance an additional edge. Fortunately, I went the right way and was extinguished as planned.