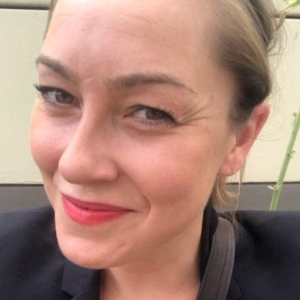 Céline Coulson has worked across various roles and companies in film for the past 16 years. Nine of those years have been spent working in the creative team at Film4 Productions. In her role at Film4 Céline worked across the development and production of a large and diverse slate of projects. Her formal education in film started at The University of California, Santa Barbara, where she took courses in script editing and autobiographical film-making. Following this she was accepted onto the Working Title Action! Scheme.

Céline’s experience in physical production includes having worked on projects as diverse as Steven Spielberg’s WARHORSE, Madonna’s W.E, Christophe Honore’s French language LES BIENS AIMES, Sam Mendes’ SKYFALL, the Warner Brothers’ films CLASH OF THE TITANS and WRATH OF THE TITANS and Danny Boyle’s 2012 Olympics film. She has worked in Production, in Stunts and as an Assistant Director.

In her current role Céline works across the development and production of a large and diverse range of projects. Some of the projects that Céline has worked on over the last few years include: Lynne Ramsay’s You Were Never Really Here, Yorgos Lanthimos’ THE FAVOURITE and Rose Glass’ SAINT MAUD.

What attracted you to Inside Pictures (IP)? What aspect are you anticipating most?

This is a course that I’ve heard so much about over the years, from many friends and colleagues in the industry who have applied for it. Those friends who have taken part have found it invaluable. Both in terms of industry connections, in the UK and internationally, and in terms of how much is learned in such a condensed period of time.

I’m at a stage in my life where having enjoyed working for a wonderful public financer for many years, I recently decided that I wanted to pursue a career as a producer, and to be able to immerse myself into the entire journeys of a smaller slate of projects. With that in mind, the 360 degree understanding that Inside Pictures provides of the entire value chain of film and TV producing really appealed to me, particularly at this moment in time, when the film and TV landscape is shifting so dramatically and quickly.

The lions share of my experience to date has been very specifically creative – in viewing material and in sourcing talent, in nurturing new and established talent, commissioning ideas at an early stage and in developing them through script stage to, and across, production. I’ve also had a lot of on-set experience, so I am excited by the prospect of becoming better versed in the legal and financing aspects of producing and in sales, marketing and distribution.

At Film4, from your icebreaker video, you talk about getting involved early on the development of projects… With emerging talent like Rose Glass (SAINT MAUD), how does a filmmaker get onto yours/Film4’s radar and how hands on or off are you as the Development & Production Exec?

SAINT MAUD was a wonderful project to work on, and it was a particular joy to work with director Rose Glass and producers Oliver Kassman and Andrea Cornwall who are all so creatively brilliant and inspiring. It was a bit of a defining moment for me in terms of my decision to pursue producing.

In terms of how those film-makers get on the radar of a development and production executive, there are many different avenues. I came across Rose because she made a striking short film ROOM 55 which I saw at an NFTS end-of-year showcase. Following this, myself and a colleague met with her and started discussing projects. A huge and essential part of my role at Film4 (and which remains part of my new role at Duck Soup) was in proactively seeking out new work and voices: being across UK and international festivals, watching films, and other creative content, going to plays, particularly at theatres that are known to showcase emerging talent – the Royal Court, The Bush etc. and attending Edinburgh Fringe. And then a lot of projects came to us via producers and agents too.

The role of Development and Production Exec is very hands on; from the sourcing of talent and the conception of an idea, through development and production. I did a lot of intensive script work – both verbally and written, ensuring that the talent feel supported, that we create a ‘home’ for them, and that we are delivering the right notes at the right time that will help guide the film-maker towards getting to the best version of their vision. On the production side, the role includes being across the decisions around casting and crew, and watching the rushes every day, giving notes as and when they feel useful. The role also includes giving creative notes on all cuts, through all stages, from first cut to sound-mix.

I was also across books as part of my role, which meant being aware of all new work and regularly liaising with our book scout, to match material to talent.

You’ve worked across a number of disciplines and aspects of development and production… What are some of the most important lessons learned during your 15 years in the industry? And did you meet the Queen?

Actually, one of the most important lessons I learnt was from a location manager on the first set I worked on. He said, he always has to go into films thinking to himself, that this isn’t a life or death situation. We are making films. There’s still a bit of a feeling, I think, that those in the film and TV industry should be incredibly grateful to be here, and that if you haven’t got your foot in the door via connections, you have to work doubly hard to prove yourself. Thankfully, I think this culture is changing as the industry tries to open out the work to everyone, and base hire on skillsets, particularly with the recent diversity strategies. Once you strip that pressure away, it allows you to focus on the work and the passion and why you are doing this in the first place – for me, it’s that I love distinctive films, I love finding new voices, I love supporting those voices, and I love seeing those projects come to fruition and do well.

Elsewhere, I’ve learnt over the years that everyone’s opinion is subjective in terms of film development – no one is wrong. We have the fundamental editorial ‘rules’ within which to work on a script, but these don’t always apply and what is really important is the film-makers vision, and in showing an understanding and support for that vision. Development is essentially bridging the gap between the film-makers intention, and what is on the page.

And on the Queen, a lady never tells! But I can say that the Olympics film was a wonderful one to work on and that Danny Boyle is a brilliant director to work for!

You’re an EP at Duck Soup now… What can you tell us about your aims and ambitions for that role? Any particular projects you can tell us about that are exciting you?

I’m so delighted to be working for Duck Soup Films – they’re a group of incredibly smart, experienced, creative, passionate, driven and all around wonderful women and film-makers. Whilst I can’t give too much away in terms of our slate at the moment, it’s an incredibly exciting roster of projects and talent – including striking original ideas, beautiful book adaptations and a diverse list of talent, all with very distinctive voices. We have a focus on underrepresented talent and stories and that is evident from our slate. Our slate continues to evolve, including sophisticated, distinctive, prescient and entertaining TV and film projects and it really feels like everything is kicking off for the company at the moment. It’s growing and being supported in that growth, by initiatives like the C4 Growth Fund. This is an exciting and productive time for us, with brilliant opportunities.

It’s all really been about keeping the company going whilst delaying going into production for another couple of years. We were so close to a greenlight, but didn’t have one, then Covid hit and when Production started up again, everything got shunted. Green lights became like hen’s teeth! There should be some Duck Soup news on this soon though!

What’s changes or innovations, in response to COVID, have you seen that will be for the greater good of the film industry going into the future and what can’t you wait to see be ‘normal’ once again?

I think one of the biggest changes is how the entire film community has adapted to the climate – we’ve all been working on Zoom, and it’s a double-edged sword; on the one hand it’s proven that the industry can still run and flourish remotely. It’s also arguably enabled more relationships to be developed and more films to be made, as it doesn’t require the film industry to meet in person. However, I’ve missed normal in-person interactions and a full day on Zoom can really get to you!

If the pandemic started today, what do you think you and would do different to make it better/easier on the company and/or your own well-being … Advice, tips and tricks welcomed…

I would definitely make sure I had a desk and my own space to work in and find a way to make sure I draw a clear line between work and life time – it’s tricky to do that, when everything is happening in the same place.

Being half French, I grew up watching a lot of French films, so I love going back to classics like the old Marcel Pagnol adaptations and slightly later, I was obsessed with LE GRAND BLEU (1988), so I’d definitely pop that on. For a more light-hearted afternoon I’d watch anyone of the brat pack films or an 80’s sci fi like FLIGHT OF THE NAVIGATOR (1986) or BATTERIES NOT INCLUDED (1987).