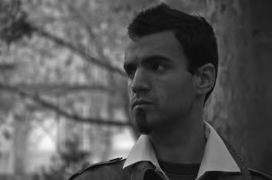 Experienced acquisitions manager, Dario Vecchiato is a 35 years old Italian based in Paris and working in Belgium for Gapbusters, an international production company. Raised in Italy and trained in Germany, Dario has an extensive knowledge of the European coproduction panorama, both through a financial and artistic perspective. He can mediate between the ambitions of a consistent script and the necessities and constrictions of the financing system that surrounds the project. Or vice-versa

What’s attracted you to inside pictures (IP)?

I thought it was the right time in my career to get more into the English-speaking world of production and financing. I’m confident with everything that concerns European co-production, but the North American/UK axis is something quite distant. I’ve spoken with other people that have done IP, specifically Italians, and they told me it was the best program for gaining an understanding of the USA/UK.

How are you finding new filmmakers to work with?

Most of the time I have to look out for new projects and collaborators. There is a real element of scouting to my job. We also have genre filmmakers, and European arthouse filmmakers come to us with their projects. For example, it’s now happening with the Frakas team, who have just won the Palme D’or with TITANE (Directed by Julia Ducournau). This will naturally lead to more approaches by producers and filmmakers who want to work with us.

What for you are the challenges of marrying up the right project with the right finance system?

French speaking content is king, but that’s not the real challenge. The real challenge is finding projects that can be co-produced with us. There are some are projects you are almost obliged to take because they’re, economically speaking, very fruitful. And there are some projects you have to let go. If I found an interesting Japanese or Russian film, we cannot co-produce that because of Belgian tax shelter rules.

In terms of European co-productions, it is important to understand that there isn’t a single EU country that has enough power to compete with a North American heavily branded blockbuster. It could potentially happen in UK for obvious industrial reasons, but also France, because France is one of the few countries that has studios, like Germany and Scandinavia as well. The possibilities are not endless, you have to co-produce within the limitations of state driven financing and an almost total absence of the gap equity companies in Central Europe.

On the plus side, the EU system allows a very positive exchanges of cultures, and some extremely creative and unique stories that would rarely get financed in the USA.

We are unlikely to grow as a rival to the USA studios any time soon. There is growing pressure in European filmmaking community to break away from the rigid co-production structures, but it will take some time to change the entire European perspective. A personal ambition is to create the conditions where this may be possible in the future.

I would say that sales can be a thankless task at times. My former boss used to say, when you’re selling, you get 15% or 25% of everything you sell. When you’re not selling, you’re losing 100%.

What I learned is that you sell films like you sell tourism packages. For instance, I’ve seen excellent war films, action dramas and thrillers coming from Russia, but people outside of Russia are conditioned to think about the country as a land of post-Soviet desperation, existential dread and vodka. And sales happily work to maintain this pre-conception by selling what sells. When the tastes eventually change, sales will change. It’s good for filmmakers and producers to critically consider this, because it helps you understand where current successes happen and why.

The dialogue between a sales agent and producers can be at odds with one another, and can lead to conflict over aims and ambitions for film. This is because most independent filmmakers tend to come from film school. Whereas, sales agents skew more to a business school background – it’s a whole other mindset.

In sales you have a complete overview of the film’s total financing. You get the film at the beginning of the earning money process. So, you see the financial plans, the budgets, etc. You see where the money comes from and who recoups which waterfall.

What can a sales agent learn from a production company? To wait. For instance, the arrival of the streamer platforms disrupted how films were sold. Independent sales companies, and even mid- range studio sales companies, lost a lot of films that became direct sales to the platforms. One way to remain involved as a sales agent, is to co-produce the film, but I’ve noticed a sales agent is conditioned to work fast, and if you’re operating within the European co-production system, I’m sorry, but you often need six or more months for script development, or waiting on cast to be available. Even if everything goes well and you finance a film quickly, it tends to take longer than expected. A sales agent isn’t always ready  to deal with the prolonged development process, and they don’t know how to deal with the variety of uncertainties that orbit around the independent financing process. They will always prefer to have everything in place – developed and financed immediately – because then they can concentrate on what they do best – sell.

We concentrated more on local productions. COVID has taught us, and I don’t know if it will stay this way in the medium term future, that it’s been very difficult to work between different countries when travels, that constitutes the co-production structure, is limited and/or not possible. There became a need to create stories, for majority of cases, in your own territory. It’s a real challenge, especially for small countries. For example, French speaking Belgium is almost a French colony when it comes to film. Without a majority of French productions, Belgium had 80% less film work than they’d had in non-COVID times.

I really suffered when I was forced, by the pandemic, to only work from home. I come from a certain type of Italian culture, where your place of work is separate, and home is where you get back to in the evening, have a glass of wine and relax. Working from home destroys that separation between home and office life. I missed my office so much during the first two lockdowns, that for the third one, I simply broke the rules and went there to spend my working days. I consider myself a very proficient worker, but I’m an easily distracted person. Being in the office really helps me to concentrate on the work I need to do, much more than being at home.

What changes or innovations, in response to COVID, have you seen in the film industry that will be for the greater good of the industry going into the future and what can’t you wait to see be ‘normal’ once again?

Before COVID, we’d already seen a disruption to how we sold and watched genre films, social comedies, some action films, etc. Films that were supposed to go to the TV or the DVD market – simply shifted to the VOD platforms. The A-list festivals/markets solidified their place as temples to the sacred seventh art.

My childhood friends, back in Italy, go to the cinema once a year. This was the case before the VOD platforms began to dominate. To me, there is no real revolution going on because of COVID. It has simply speeded up an ongoing process of change in how we watch films.

In France they teach people to go to the cinema. It’s a real school thing. Other countries like Germany and Italy, film is not considered as important, culturally speaking. Most of the bigger Italian audiences, like my friends, they go to cinema at Christmas – for the big Italian comedies or powerful North-American movies. Either you have, like they say, here in France, a ‘federateur’ film, that kind of film that will appeal to the largest possible audience where you experience it with a wide demographic of people, or you have  some really specific arthouse audiences, which are normally older; people that were taught to enjoy and to sacralize the cinema-going experience. For many mid-budget range movies, they will bypass cinema and go straight to VOD platforms or to a public service broadcaster.

One thing I fear is a kind of class divide between the people that will go to the cinema and those who will stay at home to watch films on their streamer platforms. A former professor Guglielmo Pescatore, from University of Bologna, said that the cinema experience could become in the future more like the opera.

For theatrical releases, there is progressive levels of earning. The more you do in the beginning, the more you’ll earn. How long can that incentive survive if less and less films end up in theatres?

“Amarcord” (1973) by Federico Fellini. He talks about his childhood. A bit of it is fictional, and a bit of it is a quite biographical, but it’s like a long poem about his young life in Rimini – in the Emilia-Romagna region of northern Italy. The dialogue is spoken in dialect,  a dialect I do not understand, but whose sound I deeply appreciate..It really brings me back to the Italian countryside, in my uncle’s house. It’s a film that calms me down and lets me think that in the end, everything will be alright.