Dries Phlypo (1977) is producer and managing partner at the Belgian 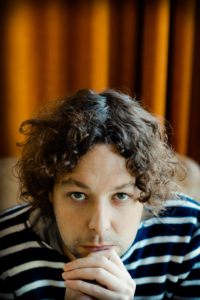 independent production company A Private View. He joined in 2004 together with screenwriter/producer Jean-Claude van Rijckeghem, he produced a dozen films, including ZAGROS (2017) and VINCENT AND THE END OF THE WORLD (2016). Dries has co-produced more than 30 international films, including DIRTY GOD (2019), COBAIN (2017). He produced four shorts: ROMANCE by Douglas Boswell, MOMENT DE GLOIRE by Hendrik Moonen, the Oscar nominated TANGHI ARGENTINI by Guido Thys and the Oscar shortlisted BAD HUNTER by Sahim Omar Kalifa.

Dries produced the television series AMIGOS (10 episodes, 2015). He also produced the animated series RUSTY with Lemming Film. In order to further his focus on TV content, he founded Mockingbird Productions in 2017 with Bruno Wyndaele and Jean-Claude van Rijckeghem. He is in post on two series MISTER PAPER (animated) and A GOOD YEAR (live action, drama).

A Private View has several upcoming projects: the family feature MY DAD IS A SAUSAGE by Anouk Fortunier. STRINGS by Kadir Balci, DUST written by Angelo Tijssens and to be directed by Anke Blondé.

He is a board member of the Flemish producers’ association (VOFTP) and in 2010 he joined Les Ateliers Du Cinema Européen (ACE) and is also a member of their board.

Why Inside Pictures (IP) Programme?
One of the main attractions is the 360 degree view of the whole filmmaking business that IP offers through the speakers and participants. I started producing in 2003, and doing ACE Producers in 2010 was a real eye opener in terms of how to co-produce at a more international level and it expanded my network and helped me to forge several lasting and stimulating working relationships. What I learned at ACE has helped me a lot over the last decade. After ten years it was time for some fresh input.

What aspect of the IP programme are you anticipating most?
There’s no one aspect on its own. I am anticipating that IP will challenge my existing ideas and maybe change how I think films can be produced. For example, following a completion bonds talk, I now understand more about how completion bonds could be quite useful on some of my projects.

More specifically to my work, I plan to start a new co-production in October – shooting in Iceland, Belgium and the Netherlands with a Dutch, Polish, Icelandic and Belgian crew. I hope I can utilise IP to find out how that might work and what problems we can expect. At the moment (August 2020) COVID rules are not fixed or uniform. Some people can just come to countries, others need to quarantine for two weeks, or whatever. It’s changing so rapidly that right now, that keeping on top of how it might work feels like the biggest challenge producers face on International Co productions.

How has being part of IP helped/informed you during a global pandemic?
Online communication has its advantages, particularly during COVID. You can see the people and you can have a discussion, but you don’t feel their energy like you would in the room together. But so far, doing IP online, I have been encouraged by what’s been possible in terms learning and networking via my laptop screen.

I miss travelling, and going to festivals, but because I’ve been doing IP, it has given me a different opportunity to meet new people. That’s one of the biggest advantages of IP during COVID.

What makes a good co-producer?
It’s quite simple. People who share your passion for the project. The kind of producer who’ll see the project through to the end, and won’t abandon it when it gets too difficult.

I worked on COUPLE IN THE HOLE (2015) – a UK, Belgium, French co-production with a total budget under €1 million. A principal actor broke his ankle four days before shooting began. We had to send everybody home. We were claiming from my Belgian insurance brokers, and as lead producer, Zoriana Piggott (UK) wanted a UK loss adjuster – one was provided by the broker.

After two months the claim still hadn’t been settled. By this time, the principal actor was ready to restart shooting. If we couldn’t green light it soon, he would be making himself available for other work. Regardless, the three co-producers remained committed to the project. I went back to my brokers with a new proposal, our claim got settled and the reshoot greenlit.

What makes you and Jean-Claude van Rijckeghem such good collaborators?
16 years ago, Jean-Claude was the producer and I was the production assistant. I quickly moved up to line produce and producer. This allowed him to spend more time on the elements he loved the most – creating and writing screenplays for film and television. Jean-Claude is good at structure and can help young writer/directors get their story on track. His focus on story helped the company to develop more projects simultaneously. And I was happy to take on more and more of the producing responsibilities at the company and grow with every project. I am now the co-owner of A Private View with him.

I think what makes us such good collaborators is our shared vision of a growing a welcoming production company that’s built on mutual trust.

How does producing animation differ from live action?
For a live action project, you have a lengthy development process, followed by a very tight shooting schedule.

In animation, there is a much longer development process, but the main difference is the much longer production period. Stop motion animators can produce two/three seconds a day. Whereas on live action we sometimes do as much as five minutes per day.

Key production decisions need to be made before you start. However, once you do start, for me as the producer, there is less work day to day, because the production is spread over month/years. For our business it works well to have one or two animation series ongoing while we develop and produce live action films/tv.

Producing an animated series/films is also easier to make safe for everyone involved during COVID. We were scheduled to produce an animation series called MR. PAPER, just as the COVID crisis hit. Everything was put on hold, but soon after, key people were able to restart MR PAPER using a combination of remote/home-working and safe distance practices in the studio. We began prep on the second season of the animated series RUSTY in July 2020 – production starts September 2020. Concurrent with these two we are also producing a stop motion film with Marlene Slot (IP 2020 too) from The Netherlands.

What’s been the greatest impact on your company from COVID?
Luckily, we had completed the shooting the film MY DAD IS A SAUSAGE, and THE GOOD YEAR – a TV series highlighted by Screendaily at Cannes TV as a promising “Hitler wine comedy”.

For the remote edit of THE GOOD YEAR we tried a virtual editing suite, where everyone involved tuned in to view the cut, but that didn’t work. We switched to reviewing the cuts of the series separately. The director, the writers/creators and/or the broadcaster would email their feedback, and we discussed it internally. We would either make a new cut, or seek further clarification of what was needed – it worked brilliantly. I think it’s an approach we could adopt in non-COVID times.

We did the sound editing and music remotely too. The only thing we couldn’t do remotely was the mixing. That had to be done in the studio, but only the sound mixer and director were present. I was happy to show up once in a while. We did the same thing with grading, but in a different studio building.

What’s the most innovative change you’ve seen in the film industry in response to COVID?
I think the introduction of a smaller release window for theatrical distribution of smaller films is interesting. Hollywood blockbusters, and their huge P&A spend, have a stronger case for an exclusive, theatrical window before PVOD, SVOD etc. For the films we produce in Europe, I think a day and date model, like Curzon (in the UK), could really help reach larger audiences. When there’s minimal P&A spend, you need to create a buzz. If you can do that on two platforms – cinemas and VOD – at the same time, there’s a better chance of people seeing your film when attention on your film peaks – i.e. the release date. I think this might be one of the biggest changes to come after COVID.

How do you think your government can best serve the film industry during the COVID?
I think, as a board member of the Belgian Producer’s Association, COVID insurance is one of the biggest issues for producers. As an independent producer, we want to find a way to get productions off the ground, but if something COVID related happens, it shouldn’t all fall on the producer’s shoulders. I know the Belgian government (August 2020) are working on how the insurance can be arranged to cover COVID claims.

What’s been your lockdown film/tv discovery?
UNORTHODOX (Netflix Original), it was amazing.