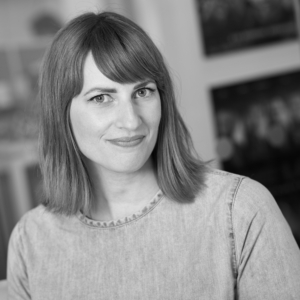 Emilie Barra is a marketing manager at Signature Entertainment, working across theatrical and home entertainment film releases in the UK.

Originally from Paris, France, Emilie is fully bilingual and has an extensive background in film distribution, film marketing and acquisitions.

Her career spans 15 years, having worked for the likes of Optimum Releasing, StudioCanal UK, Universal Pictures UK and is currently the marketing manager at Signature Entertainment.

Emilie is a very versatile marketeer and brings a breadth of knowledge, creativity, real-world market expertise and passion to any project.

Film campaigns Emilie has worked on include ROBOCOP, UNDER THE SKIN, SHAUN THE SHEEP THE MOVIE, PADDINGTON, THE WRESTLER, BLUE VALENTINE, THE GUILTY, BEYOND SKYLINE, COME TO DADDY and THE PEANUT BUTTER FALCON. Emilie has also worked on the BARBIE, MONSTER HIGH, POKÉMON and BING brands Home Entertainment outputs and more recently the Frightfest Presents label.

A true cinema fan, self-confessed geek and horror buff, Emilie spends most of her spare time watching films or reading about them!

Why Inside Pictures (IP)?
I talked to everyone I knew who’d done IP to help make up my mind during the application process. All of them were positive about the impact of IP. That really influenced my decision.

The community aspect of IP is crucial as well. Currently, I don’t attend many markets or festivals. Which means I have fewer chances to meet new people within the industry. IP brings me together with 19 other film professionals over a long-ish period of time. That’s a very unique part, and what made IP even more appealing.

How has the IP experience been during COVID?
It’s a pretty unique thing to be doing IP during COVID. As a result, I think we already feel quite close to each other, even though we’ve only connected via our computer screens. The special circumstances are a great motivator for everyone to try to make it work.

It’s not always easy working from home. I’m a mom, and like many parents, I’ve been doing my fair share of home-schooling. So, IP has allowed me an opportunity to focus on my self-development; commit to taking some time out to just think about me, and my career.

What changes have you witnessed over the last 15 years in terms of releasing films?
When I started out in 2005, the DVD was king. The first half of my career was defined by home entertainment/physical media. For the second half, almost every year, someone else wanted to tell you the DVD was over. It became a bit of a running joke. It’s 2020, and even during a pandemic, we’re still selling DVDs in supermarkets. Audiences are organically turning to digital consumption with lockdown – whether that be a digital purchase/rental or subscribing to a SVOD platform. I think lockdown has proven that films can be seen by much wider audiences, meaning that the desire for a theatrical release to generate buzz is no longer there.

We’ve been a champion of the day and date releases and PVODs for years. Last year, for AMERICAN WOMAN (2019), our campaign was extraordinary. The film was launched in cinemas and on EST platforms simultaneously. Sienna’s passion for the project shone through; our excellently executed PR saw her featured in the highest profile outlets across broadcast, print and online. The film was promoted on the UK’s biggest chat shows and across multiple magazine cover features.

More recently, ENDINGS BEGINNINGS, starring Shailene Woodley and Jamie Dornan, got some amazing PR breaks for a digital only release: broadcasts interviews, done via Zoom and phone. The COVID slow-down has meant actors are more amenable/available for press interviews; and broadcasters are happy with remote interviews. We’re doing so much more high-profile PR activity as a result.

What involvement does marketing have in the acquisition of films?
Signature are very much about what films do you love? And they trust your opinion. Especially, if you’re a genre buff like me. So, I get to screen and assess new films for them regularly.

After all these years, I’m still not someone who turns a film off after half an hour if nothing happens. I’m always hopeful of the big twist; or a spectacularly gory death. That does mean I have to sit through some films that don’t make the cut… But that’s what it takes to discover the commercial, quality ones. Although, sometimes I have to say look guys, I’ve watched too many generic genre films, please send me a drama or something – as a palate cleanser.

What’s been the greatest impact on Signature from COVID?
We’re are a very lean, flexible team. So, we’ve been able to pivot, quite quickly. We were also lucky that nothing was in production when the pandemic hit.

We’re currently buying a lot more content for immediate SVOD exploitation, whether it be a classic library title or a new programme to the market.

I guess we’re lucky to be in a position where we don’t rely solely on box office money.

A lot of our new releases for the UK have been held back because of the uncertainty and changing US market. To ensure the best campaign, we work to long lead times when lining up press for a film, but since release dates are now more changeable, it does make things tricky sometimes, but I guess journalists are used to it by now.

I’m working on a new horror – RELIC (directed by Natalie Erika James). It’s my baby because I loved it as soon as I screened it and knew there was something original and special there. And I want people to see that on the big screen. I really hope that by the end of October 2020, people feel confident enough going to the cinema, and go out to watch RELIC.

In the wider film industry, what innovations have you seen in response to COVID?
I watched HOST (directed by Rob Savage). Emily Gotto (Shudder), another IP participant, is involved in it. I’d heard her talk about HOST so much and was worried I’d built it up in my head, but it is so impressive what they achieved! I’m now super excited for horror again, because if a film that good can be made in the hardest of circumstances, then there’s hope for us all.

I’ve been impressed by independent cinemas getting into the digital space. For example, The Rio Cinema, my local, has launched a digital platform called ‘RIO PLAYER’ and I’m very keen to support the little guys.

How do you think your government can best serve the film industry during the COVID?
I’d like to see more help for independent cinemas. While they’ve been allowed to re-open again, there are restrictions on the number of tickets they can sell for each showing, which means their takings are still much less than pre-COVID. If we value them and want them to survive this period, some support would be very useful.

What’s been your lockdown film/tv discovery?
I’ve been doing a film club with a friend. We’ve watched the likes of: THOROUGHBREDS (2017), DISCLOSURE (2020), the documentary about trans people and representation in cinema, and CALM WITH HORSES (2020). We also revisited some classics – just finished the GODFATHER trilogy.

Plus, my husband and I are re-watching the whole of the US OFFICE.

As a horror buff, what’s your favourite (or top 3) horror films?