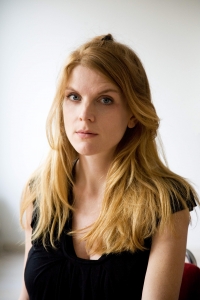 Femke Wolting is founder and is managing director of Submarine, together with Bruno Felix, an independent film and transmedia production company, spanning features, documentaries and animation. Submarine boasts a roster of award-winning productions created in collaboration with an extensive network of international acclaimed directors. Femke has produced, among others, Peter Greenaway’s feature Rembrandt’s J’accuse, award-winning documentaries such as Meet the Fokkens, and Rainmakers; and internationally distributed animation series such as Kika & Bob.

Femke has produced groundbreaking transmedia productions such as the Emmy-nominated Collapsus (www.collapsus.com. Recently she founded, together with Bruno Felix and Tommy Pallotta, a new creative production company in Los Angeles, SubLA. The company develops and produces feature films and interactive experiences that explore new forms of storytelling that encompass traditional and emerging media. Recently Femke produced Peter Greenaway’s film, Eisenstein in Guanajuato, that premiered in competition at the Berlin Film Festival 2015. Last Hijack, a film that Femke Wolting produced and co-directed with Tommy Pallotta, premiered at the Berlinale Film Festival 2014.

Submarine likes to respond to the rapidly growing and changing international film business. I have the ambition to develop and produce feature films and documentaries for the international market. I am interested to expand my network in the international film industry. I hope that Inside Pictures will give me a better understanding of that part of the industry, learning more about where the business is and might go in the next five years. I also would hope to built a strong network of partners for future film projects such as sales agents, distributors and financiers.

So far the programme has been amazing: a really good group of participants, excellent speakers/tutors. Very inspiring.

You recently re-located from the Netherlands to Los Angeles. What attracted you to Hollywood and why did you decide to open a branch of Submarine in L.A.?

Together with Bruno Felix and Tommy Pallotta we founded SubLA in Los Angeles, the sister company of Amsterdam based Submarine. With Submarine we produced many European co-productions, to attract an international audience for our films, and to be more independent from Dutch broadcasters and funds.

Los Angeles is the epicenter of filmmaking and an exciting place to be with the new platforms such as Amazon and Netflix. In L.A. there is the opportunity to access all the financing and distribution possibilities whilst in Europe there is the advantage of having the freedom to work more outside of the studio system.

In your experience what do you think is the main difference in filmmaking culture between the USA and Europe? What do you appreciate about the American way and what do you still find challenging?

In the US filmmaking is an industry, a business. The advantage of that is that people are more entrepreneurial and adapt faster to changes in the industry. I enjoy that the US is more dynamic. On the other hand, in Europe the focus is more on authorship and the art of filmmaking. I believe in European cinema, as it has soul and authorship. At the same time, I want to make films that are seen by an audience so I am interested in thinking of innovative ways to widen the scope of the films that I produce. I am constantly looking for collaborations between the US and Europe.

Submarine Channel is your own transmedia storytelling platform. How do you drive audiences to your platform? What does a transmedia audience look like? Does your transmedia work feed into your feature film work?

We have built our own audience on Submarine Channel, mostly from the UK, US and Europe over the last 10 years. We drive audiences to our platform in many different ways, through social media but also through the different media we use within the projects, like the feature film, the interactive online components, sometimes a book, a game, an installation. Each part has its own audience and helps drive the audience from one part of the transmedia production to the other part. For example, our feature length hybrid film Last Hijack, which was released worldwide theatrically and on VOD, helped find an audience for the interactive web documentary Last Hijack Interactive and vice versa. Especially when we won an Emmy Award with the interactive production, the film got a second life on VOD and in the festival circuit. For each transmedia production we look at the specific target audience(s) and try to interest them for other transmedia productions on our own platform.