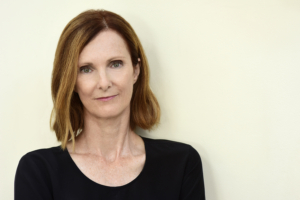 Jennifer Naughton is Partner, Head of Literary at RGM Artists Pty Ltd providing creative strategy and leadership to the development of scripted content with creators, writers, directors, and producers working across film, television, publishing, podcasts and the occasional comedy tour.  Her love of cinema was cemented with an honours degree in Critical Theory Film/Theatre from the University of New South Wales, post graduate studies in Media Arts and Production at the University of Technology, Sydney and a short course Learn to Lead, through the Australian Graduate School of Management at UNSW Business School.

Jennifer found the perfect blend of creative and business when she joined RGM after a year at the Sydney Film Festival where she was CEO. Prior to that, Jennifer held roles at the Media Entertainment and Arts Alliance in Actors’ Equity and at Endemol Shine (formerly Southern Star) in Business Affairs.

Jennifer sits on the Advisory Board of We Do It Together, an international production company created to finance and produce projects uniquely dedicated to the empowerment of women as well as Dame Changer which seeks to build resilient, sustainable and successful careers for women in the screen industries.

What attracted you to Inside Pictures (IP)? What aspect are you anticipating most?

I’d been broadly aware of IP through people who’d done it before. I read up on it and it sounded amazing not only in terms of the content, but the 360 degree perspective of filmmaking that IP offers which is unparalleled.

What for you makes a good representative?

How can a creative client get the best out of their representative?

Firstly, be prepared to do the work and be active in your career. Take responsibility for the way in which you communicate with your agent. Two-way communication is really key, but being clear about what it is that you want, and actually hearing them when your rep says, “that’s not realistic, but let’s try this or let’s try that.” Expecting them to always call and waiting to hear from them isn’t going to help you or them. Always be clear about your expectations and be prepared to discuss the reality of what can be achieved. Those conversations have to be regular. It will never be a case of stating what you want to do, and X years later, it simply being so.

Agents in many ways are designed to be invisible, because it’s all about the client and their work. Having said that, it’s not just about being in service of the client because I think that’s not a proper, accurate description of the relationship, but it is very much about putting their professional – and often personal – needs above your own. Sometimes that is hard. It’s a lifestyle, not just a job.

What projects have We Do It Together got in the pipeline?

There are a couple of anthology style projects in the works spotlighting stories of immigrant women from Italy, India and the US. They’ve been able to pull in some big names such as director Catherine Hardwicke (TWILIGHT, THIRTEEN, MISS BALA), and Academy Award winning actress, Marcia Gay Harden (MYSTIC RIVER, MOXIE). I’m excited about what we’re doing and what we’re hoping to achieve.

How is ‘Dame Changer’ helping to build resilient, sustainable and successful careers for women in the screen industries?

Too many female filmmakers make their first film and then that’s the end of their career. Dame Changer was set up to help women be more resilient – to get back in there and fight for what they want to do next. It’s about: creative capital, skill building, mentoring, industry access and advocacy.

I think what distinguishes Dame Changer from similar initiatives is that we’re project focused. There are a couple of film and television development programs: Script Tank and Screen Tank. With Screen Tank, projects and their teams go through a five-day incubator programme. The filmmakers are exposed to all sorts of people from across the industry, with a view to moving their projects forward. The aim is that they better understand what they need and make industry connections that will help progress their project through to production.

We also run ‘masterclasses’, ‘ask an expert’ and COVID contingent networking events. We’re helping people crew their projects with women in key roles and connecting women across the industry.

What for you was the greatest impact on you and your company from COVID?

When production shut down, development in this country and globally, exploded. A lot of state and federal funds which were dedicated to production were diverted into development. Consequently, producers and companies wanted writers for their projects. It was a phenomenal opportunity for emerging writers to get their foot in the door, because many of the more experienced writers were already booked up for some time. Over the course of the pandemic, it has allowed us to leverage those writers into other opportunities, which has been a real game changer for their careers.

What changes to medium/long term visions/plans/aims will go back to what they were and what is likely to remain changed forever?

Our industry – not just here – but internationally is populated by many small businesses. A number of them are, and continue to be hit hard by the uncertainty of living in a post-COVID world. Ultimately for us it’s about remaining agile. You have to be able to shift focus; modify the way you work based on accommodating new information as it arises. We were able to focus a large part of our efforts and energies on development work is because we are really used to covering many different facets working with our clients on their projects.

I do fear there’s going to be companies that don’t survive. It’s really hard to say, definitively, what will be changed forever, but I, as ever, remain confident that great content will always find a way to be seen, heard or read.

The other big change relates to how we connect with the global industry. In any given year, I would ordinarily be doing at least one trip to North America, usually Sundance or Toronto, with clients. As of now now (July 2021), in order to travel in or out of Australia, you need government approval. If it’s for work purposes, you have to prove you have a bona fide offer of employment or on compassionate grounds and you’ll be away for a period greater than three months. We did have a travel bubble with New Zealand, but as soon as the Delta variant became known, that’s been put on hold. The Prime Minister is saying that it’s unlikely that our borders will reopen until mid 2022.

What’s changes or innovations, in response to COVID, have you seen in the film industry that will be for the greater good of the industry going into the future and what can’t you wait to see be ‘normal’ once again?

The company behind the Australian soap NEIGHBOURS was one of the first to find a way to continue production during COVID lockdowns. They created pods within the production, and strict rules governing which pods could intersect with each other. If at any given moment, somebody in any pod was infected, that pod would stop work, and everybody else could continue. That model wouldn’t necessarily work for all productions but I thought that was really innovative. I suspect that as these new variants arise, strict rules around working will continue to be something we’ll have to consider.

A couple of films created an entire bubble with cast and crew when shooting on location. They all stayed in the same hotel. They were bused to and from set. They were all given meals by the same caterer whether on set or at their accommodation. No one interacted with anyone outside the production.

It will be great when there’s no longer a need for 14 days quarantine or having a COVID test every two days during production. For those working on set under these conditions it must be unrelenting.

If the pandemic started today, armed with what we know now, what do you think you and/or company would do different to make it better/easier on the company and/or your own well-being … Advice, tips and tricks welcomed…

I would have been more confident to say to colleagues and clients, it’ll be okay, but because nobody knew how or when it would play out, it wasn’t easy.

I would try to make clients more aware of how job creep at home was going to affect them, psychologically. When you have close personal relationships with clients, it’s very hard to ignore their stresses and anxieties. I think all our agents were trying very hard to make sure that people felt that sense of positivity and hope. Knowing what we’ve been through up to this point, I would be reiterating how it’s so important to stay positive, maintain regular exercise, eat well, meditate, hug your loved ones (whether people or pets), and take any moments of joy you can get.

For discipline, I try and work in the office as much as I am able, to avoid feeling like I am stuck in the house. I’ve done the last two months (June/July 2021) in the house, and it’s been hard. The division between work and life just disappear. You’re juggling WhatsApp calls, WeChat calls, FaceTime calls, normal mobile calls, as well as emails. It can quickly become a never-ending cycle of work, because there’s no distinction between your workday and home time.

On a lighter note, it’s Sunday afternoon. It’s raining. You’ve nothing else to do that day, what film are you’re putting on to relax.

I like to revisit old favourites on a regular basis. Maybe VOLVER (2006). Something from Ang Lee or Todd Haynes or John Ford? Yasujirô Ozu’s TOKYO STORY (1953)? Maybe Jim Jarmusch?