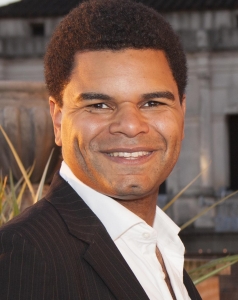 John Giwa-Amu runs production and financing company Red and Black Films with writer/director Caradog James. John produced the company’s first feature, Little White Lies, for £90,000 which won two BAFTA Cymru Awards and was BIFA nominated. His follow up feature, sci-fi cult hit The Machine, was selected from over 6,000 films to premier in Tribeca and won three BAFTAs Cymru including Best Picture, a BIFA and the Screen Award for UK distribution also managed by John.

The Machine was the most pirated movie in the world during April 2014, reaching number 2 on iTunes surpassed only by The Hunger Games. The film has been optioned to be developed as a TV series by NBC Universal/SyFy which John will Executive Produce. Brit List winning screenplay The Call Up premiered at BIFF 2016 and was released in cinemas by Altitude in May.  Co-Production The Silent Storm starring Damien Lewis and Andrea Riseborough was also released in cinemas in May 2016. Don’t Knock Twice, by director Caradog James, is currently on the festival circuit. John was listed as a Future Leader by Screen International and sits on the board of Film Cymru Wales.

What interested you in Inside Pictures as a programme when you applied? What is your impression so far?

The finance side of things and contacts were what attracted me having been part of similar, but lower level courses before I knew there would be huge value in these elements. The course has lived up to this and more.

You have worked with the US in the past, which means working with a completely different filmmaking culture than Europe. What attracts you to working with the USA? What are the challenges?

The upside for me is that American films and the way they make them seems to have a greater probability of being a business, rather than vocation. The challenges as always are a new set of contacts to navigate, but IP has helped expand my address book on this.

Part of your business model is to produce quality genre films on a budget. What are the challenges of making genre films in the UK? How well do they travel abroad?

What we do travels far better abroad than it does at home – my genre leaning film’s biggest sales are consistently to USA, Germany and Asia. I think, in distribution terms, this is a mixture of a tough home territory in the UK and our films being designed for an international audience from the outset.

Film Cymru in Wales has been a key supporter across our films. We’ve not been supported by the BFI for production funding yet so this is a key goal as something we’d like to change. It’s crucial money to making any finance plan more attractive to private equity investors and a creative partnership we’d love to build on.
Your second feature The Machine will be turned into a TV series for NBC Universal/SyFy, which is not your first array into the TV serial world. What excites you about the serial format?

Consistency is something I’m really interested in experiencing – feature film’s rarely give this. What does it mean when you don’t have to reinvent the wheel every time and can quickly capitalise on success is a question I’m keen to explore.

What will it bring to the story world of The Machine?

More resources allow us to expand the world exponentially. There were many ideas we delivered on with the film, but many we had to mothball – myself and Caradog can’t wait to see these bigger ideas realised.

Is TV a path you ever considered when developing the feature years ago?

Creatively yes, but we had little practical idea of how to make something of the scope we had in mind in terms of finance and guidance. For this, SyFy/Universal have been great. The channel mission statement is “Imagine Greater” and it’s been brilliant to be supported in thinking that way.

What else are you working on at the moment?

As a company we have our core feature projects, three of which will be ready to be presented and packaged within the next month or so which is exciting. On the TV see we’ve optioned four TV series ideas based on existing properties over the last 18 months which we’ll be presenting in the UK and US in the coming months. I also have two documentaries, a VR hybrid film which I’m keen to launch based on a best-selling book franchise. Finally, we’re repeating the Screen Award winning partnership we had with Content for The Machine’s UK distribution campaign on Don’t Knock Twice and have a VR game of the film in production also.