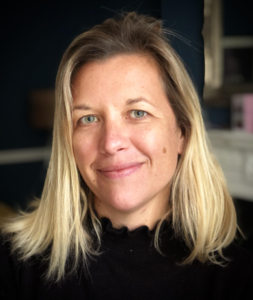 Kate is a freelancer who works as a film producer. Originally hailing from Sydney, Australia, she worked in children’s TV before writing, producing and directing her own horror feature film at the age of 20.

Upon coming to the UK in 2006, she began working in various production roles for companies including BBC, Scott Free, Netflix, StudioCanal, Lionsgate, FX and AMC.

Coming up the production route she has worked as a Line Producer and Unit Production Manager for feature films including THE FORGIVEN, GREED, HAMPSTEAD and MR HOLMES and for high end TV shows including MCMAFIA and A CHRISTMAS CAROL.

She stepped up recently to produce the first episode of Season 5’s BLACK MIRROR: STRIKING VIPERS which was shot in Brazil and was nominated for a PGA award: Outstanding Producer of TV or streamed Motion Pictures.

Two of my friends had done it and they both really enjoyed it, but I wasn’t sure how I’d make time to do it and get the best out of it. I’m usually in full blown production mode – sometimes three or four films a year.

This year, when everything started going a bit pear shaped, I thought, now’s the time for me to do Inside Pictures.

What are you enjoying/anticipating most about IP?

I’m excited about working with Rusta Mizani (Augenschein Filmproduktion). He’s done a mixture of sales and finance – aspects of the film business that I don’t get much exposure to when I’m producing films and tv shows.

I’ve enjoyed learning about how my European peers get their films made. Sometimes in the UK, it can feel difficult to get the more arthouse types of films over the line. For example, I’ve been learning from them about the different ways they secure soft money. It’s giving me a broader perspective on what else is possible when it comes to getting films financed. Our group is super experienced across a number of disciplines. I wouldn’t normally get involved in the sales or marketing discussions. So, IP is opening me up to new ways of thinking about my film projects.

You produced both the 47 METERS DOWN movies… What lessons learned can you share about shooting films underwater?

The first one, 47 METERS DOWN (2017) was incredibly challenging. None of us had ever shot anything underwater. So, we got to learn some harsh lessons – like don’t accidentally flood the tank with unwashed sand.

When we completed the underwater work in Basildon, we got to go to Dominican Republic. On the day before we start shooting again, there was some kind of Sargasso Sea effect. Which basically dumped tons of seaweed onto the island. It was like a five-foot high green/brown wall, and we had to make it look like paradise. Everyone was on shovel duty to dig it away. It was full of jellyfish eggs and a few of us got stung. But we got there in the end, and I’m really proud of the film.

The sequel, 47 METERS DOWN: UNCAGED (2019), was a little bit easier, in terms of budget and experience gained from the first, but it was also more difficult because we had to build the underwater caves. The only way to do it – on time and in budget – was to book out both Basildon and Pinewood; and jump between the two stages. The actors would swim through one section of cave. You’d take that section out, travel to the other set, and put a new underwater cave in. Back and forth like that. It was pretty intense.

BLACK MIRROR – How was it shooting in Sao Paulo, Brazil?

Sao Paulo is an amazing city. It looks really futuristic, and really otherworldly – like West Side Story-esque or something. It’s really visual, lots of cool graffiti and very unusual architecture. I loved it. I’d never been anywhere in South America so it was a completely new experience.

It’s quite expensive to shoot there, but the main thing was the traffic. I’ve never seen anything like it. It took hours to get anywhere in the city.

At the start of your career, you directed a horror set in the pub.

I thought SLAUGHTERED (2010) would be 10 times harder than the short films I’d done at college – because it was 10 times longer. That’s what I said to the poor people who agreed to shoot it with me. We shot for four weeks, at the pub I worked in. Every night, my poor manager slept on a mattress – because the owner would only allow the shoot, if I was supervised.

I quickly realised I prefer producing, to directing. Trying to do both on your own, when you’re 20 is quite tough, but it played at SITGES, and we sold it.

What’s been the greatest impact on you from COVID? What lasting effects do you think will mean changing your medium/long term aims and ambitions?

We were out shooting our last film in the middle of the Sahara Desert, when we were given just 24 hours-notice before Morocco shut their borders. A private jet was the only option. It landed in the desert and took us straight back to the UK. So, that was quite traumatic.

I was asked to produce another film in September 2020 (scheduled pre-COVID). Now (speaking in August 2020) the risk of COVID for film shoots is still quite high if you don’t have a Netflix, or a studio behind you. I’ve been out location scouting for it, and we now have places in Liverpool and London, just in case one of those cities closes. We are basically doing the equivalent of setting up two films in parallel. It makes me feel quite anxious about smaller productions being able to shoot during COVID. They’re risky in the sense that they’re often shot on location. Whereas bigger budget films can work in the more controlled environment of the studio.

What’s a positive changes have you experienced in response to COVID?

Not being able to travel around the world as freely has definitely made it easier to just talk to people that you don’t have regular access to. I used to live in New York and now I live the UK. I tended to go over and see NYC contacts once a year, but because of COVID, I have been talking to people more often on Zoom than I would have met with them. So that’s been good.

How do you think your government can best serve the film industry and/or keep film/tv production going during the COVID?

There were some rumours ahead of the UK Government’s insurance cover announcement. One was that they were only going to underwrite films under £10 million. It felt like, if true, that might create a new age for the independent film.

Instead, the £500m COVID insurance fund, will have a cover limit per shoot of £5 million max – regardless of total budget. The fear is that it will be used up quickly by bigger budget films claiming the maximum amount. Indie producers will be nervous to start up their productions because there’s not really any guarantee of being covered. The protection is only available until fund runs out. Plus, what is and what is not covered is a little unclear. The guidance to date (August 2020) says you’ll probably be covered if you’re in principle photography, but what about if you did eight weeks of prep on a big set construction, and you’re ready to shoot. If you’re shut down then, would you still be covered? Hopefully, there will be more government announcements soon. So, in answer to the question, more clarity is how the government could best serve the UK film industry at this present time.

I watched the Israeli Special Forces drama FAUDA on Netflix. I downloaded MUBI as it’s got lots of short films. I really enjoyed OLLA (2019), directed by Ariane Labed (actor in THE LOBSTER).