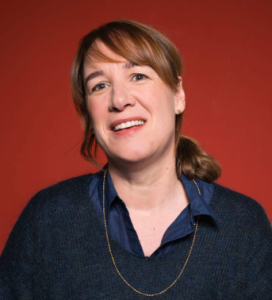 Leontine Petit is founder and CEO/Producer of Lemming Film (NL) and Hamster Film (GER). Before working in film production, she studied at the University of Amsterdam where she earned her Master’s degree in Philosophy. She graduated from EAVE and is a member of the ACE Network. She was Producer on the Move (2006), producer at the Hong Kong Filmlab (2010) and producer at Toronto Filmlab (2013). In 2014 she participated at EAVE+.

She has been the President of ‘Bridging the Dragon’ since 2017, an association that connects European and Chinese Film makers. In 2016, she won the prestigious Eurimages Coproduction Award at the European Film Awards.

Lemming Film has, for the last 22 years, successfully (co-)produced 44 feature films and 15 TV series in Europe and beyond. Lemming Films’ projects have been sold to many countries around the world and have won various national and international awards. Lemming Film has co-produced with almost all European countries and also with Mexico, Peru, Argentina, Colombia and China. In 2011 Lemming Film started a German family entertainment company called Hamster Film, located in Hamburg.

Two Alumni – Vanessa Henneman and Siniša Juričić – told me about the programme and I totally agree with them that it’s an enormous honor to be part of Inside Pictures. This is not only because of the enormous amount of knowledge and contacts you gain in such a short amount of time, but also due to the selected group of film professionals that share information and their passion of film with each other. You almost cannot imagine that this is so valuable, until you have started with the programme.

2. As founder and producer at Lemming Film, can you tell us a little about what a typical day looks like for you?

We are working with several great producers at Lemming film. My job as CEO / producer is to work with them on projects in development and production. I am in endless meetings to motivate, troubleshoot, talk about creative decisions, make financial and business decisions not only our own staff, but also with creative talent and the international partners we work with. I am the one who tries to keep the helicopter view on all aspects of our company.

3. You’re currently President of ‘Bridging the Dragon’, an association which is connecting European and Chinese filmmakers. What are the unique opportunities to collaborating with China? And the unique challenges?

China is so big in terms of audiences and cinemas that they need the rest of the world to keep up with their enormous hunger for content. So it’s especially on the content side that they need collaboration. They do not need our money so much – although they like the fact that we have tax shelters and incentives in Europe that can reduce their risk. We also have beautiful and exotic locations.

However, there are also big challenges because we have to understand each other both on a language level and when doing business. A ‘yes’ is not always a ‘yes’ and a ‘no’ is not always a ‘no’. Moreover, there are very few creative producers. Yet, just like in the rest of the world, it’s a people business and if you invest enough time and effort in getting to know the right people in China, it’s an enormous – almost endless – market.

Our slate is very eclectic. At the moment we are shooting a romantic comedy called PICTURE PERFECT. Next to this we are closing the finance of our first English TV series THE HEIRS OF THE NIGHT for tweens (26 x 25’) with the NDR (Germany), NRK (Norway), NPO (The Netherlands) and ZDFE which we will start shooting in Spring 2018. We are also in post on an arthouse film co production called MONOS, the new film of Alejandro Landes (PORFIRIO) and Alexis dos Santos (UNMADE BEDS) with producer Fernando Epstein from Colombia. We also just finished the post on our new TV series (8 x 50 ‘) FENIX by director Shariff Korver.

To find out that LA is also a small community of very professional people that want to make strong TV and film and that the community is very open to working with us Europeans. Just like us, they do not necessarily know the answers to all the big burning questions of the industry of today. Questions such as, what is going to happen with the distribution of feature films; how will the new platforms transform our landscape and what is the best business model for financing our films; or what do we have to produce for our audiences to keep them also wanting to see independent films and amazing TV series.