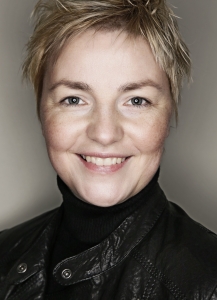 Linda Krukle is a self-taught person in the film industry having the professional education and 5-year working experience in the business tourism sector. From 2004 she actively handled various TV shows as a producer assistant and represented internationally the biggest studio complex in the Baltic states. Since 2009 Krukle runs two companies – film production company Krukfilms (co-founded with director and script-writer Maris Martinsons) and non-profit foundation MM art.

Two of Krukle’s produced movies have been in a race for the Academy Awards in the Best Foreign language Film section – splendidly awarded movie LOSS (2008) and the first Latvian – Hong Kong coproduction movie AMAYA (2010). The main focus of Krukfilms is creating feature films and documentaries with no boundaries and possibilities in terms of chosen country, genre, language or budget, producing multicultural films both locally and internationally – Hong Kong, USA, Japan, Ireland, Lithuania and Latvia. All in all Krukle has produced 6 feature films as a delegate producer ending with the first Latvia  – Japan co-production MAGIC KIMONO (2017) and is developing various film projects open for co-production.

The foundation MM art has been established with a vision to organize cultural, audiovisual and educational events, performances, master-classes, exhibitions, etc. The biggest event organized by MM art is the annual Street Musicians Day that is held each August in Riga since 2010.

Krukle is fluent in English, Russian, Lithuanian and Latvian (mother tongue). She’s been a participant in the Berlinale Talent Campus 2013 and Producers on the Move 2011.

How did you find out about Inside Pictures and what attracted you to this programme? What’s your impression so far?

I found information about Inside Pictures in a list of the Media supported training programmes a few years ago. I was reading about the programme a lot including many reviews from the alumni – that, out of all things, influenced me most to apply. I feel incredibly honoured to be a part of this community. Within the 1st Module I regained the confidence where am I, what are my targets in the film industry, and that thanks to the possibility of providing the content, we’ll have a future no matter where we are from. The 2nd Module in Los Angeles gave me a brand-new understanding of business structures, this 360-degree spectrum and an inside feeling that whatever creative model we are choosing, as long as we do it with passion, it will be awarded sooner or later. The 3rd Module absolutely shook me and pushed me to re-evaluate my professional life. It opened up a much bigger perspective of what’s actually possible.

Latvia, much like its immediate Baltic and Eastern European neighbours, has experienced a major system change in the last decades which also changed how films are made, distributed and seen. Can you tell us a little about the challenges and opportunities you are experiencing working out of a smaller industry and market?

Yes, indeed, we are living in a brand new system. But – at first I would call this a smaller industry and almost a zero market. I feel that one of the hardest things for filmmakers to understand was accepting the change from “the state should give me the money” to the “producer has to prove both to the state and private institutions the project is worth being financed”. The next – for numerous years we’ve been frightened that we are a small country and nobody wants neither us nor our movies and some filmmakers felt disheartened by the repeated rejection outside of the local market. Sometimes it jeopardized the content, just to please the demands of the bigger (more richer) producer or distributor. In terms of the co-production and getting the subsidies – as a small country we are not so interesting, as there is not a big money option. Still I’m feeling that the trend is changing, what we need to do is to follow new developments, build a strong network and promote our uniqueness – Latvia and our closest neighbours should use and exploit that we are both Western and Eastern countries, we are professionals who are capable of understanding and collaborating efficiently both within the new and old systems.

You have been involved in many co-productions including collaborations with Hong Kong and Japan – what was your experience like working with your Far Eastern partners? Any top tips for European producers working for the first with Asian partners?

I believe that you always have to have a good reason why you are choosing a co-production country so far from yours. Apart from some co-productions within Europe or so called Europe puddings, going so far needs more explanation and background. To have a successful partnership you need to learn about the culture before making the first steps in Asia, and, surely, each country requests a separate attention… The networking culture, negotiation culture, business culture, not forgetting about the meaning and importance of hierarchy. Pay close attention as collaboration with Asian partner will take longer time and patience. Talk with people who have worked there, ask their opinion, advice, support, go there, observe everything yourself before signing up for anything you’d like to do there.

I’m in the very late post-production stage of the first Latvian – Japanese co-production movie MAGIC KIMONO (2017) set in both countries telling an incredibly touching story of a woman (played by multi-awarded Japanese actress Kaori Momoi) who can’t bid farewell to her past. And there are some feature projects in development including the coming of age movie DOUBLE DROP that is inspired by a true story of a worldwide famous DJ, which I believe will be a very strong human drama. Thanks to my time within the Inside Pictures programme, DOUBLE DROP developed a very strong and focused concept and will be an interesting natural co-production among several European countries.

Simultaneously, I’m translating some original novels for a Latvian audience and as every year since 2010 I’m producing the annual ‘Street Musicians Day’ in Riga.