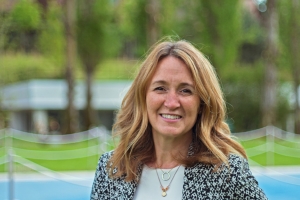 Samanta Roberts is an experienced Bilingual Head of Marketing with a demonstrated history (17 years) of working in Film Distribution.

She was born in Buenos Aires, Argentina but has lived most of her life in Madrid, Spain where she studied in International Schools and graduated from Saint Louis University with a B.A in Communications and a Minor in Marketing.

Upon graduating she started working in advertising, where she worked for three years at multinational agencies such as Saatchi & Saatch before moving in to film distribution in 2001.  She started as Advertising Manager for Aurum Producciones, the leading Independent Film Distributor in Spain at the time (now owned by Entertainment One Films) in charge of all the creative content and advertising strategies for theatrical releases. In 2004 she was promoted to Marketing Manager where she supervised all areas of the marketing mix (promotions, trade, events, PR & publicity, creative and media buying and planning) and since 2009 she has been the Marketing Director of Entertainment One Films Spain where she has been leading the marketing team and overseeing all marketing activities and defining marketing and distribution plans and budgets. Overall, she has released 250+ titles including worldwide blockbuster franchises such as THE LORD OF THE RINGS TRILOGY, THE TWILIGHT SAGA and THE HUNGER GAMES SAGA, along with Academy Award winning films such as SPOTLIGHT, SILVER LININGS PLAYBOOK, THE POST and more recently VICE, IF BEALE STREET COULD TALK and the 2019’s Best Picture winner, GREEN BOOK.

Samanta has also launched and overseen the marketing campaigns for a variety of Spanish local productions and European Productions including: WOMAN IN BLACK, SUBMERGENCE, 7 DAYS IN ENTEBBE, SUITE FRANÇAISE, VALERIAN AND THE CITY OF 1000 PLANETS, along with eOne Productions STAN & OLLIE and WILD ROSE this year.

In addition, she has also given specialised conferences in film marketing and distribution at post-grad Universities, she was chosen as one of the 13 participating candidates in Europe for the Media Business School, MD program and has been repeatedly asked to join roundtables and conferences to do with film marketing and advertising in Spain.

I have been working in film distribution for over 17 years and I consider myself hugely passionate about the film industry, but had never had the opportunity to actually step inside the heart of the industry and see and understand the different parts of value chain as they stand today. The possibility of learning about the insides of the global film business through the high calibre speakers in every module, together with 19 like-minded and hugely professional individuals was, to me, what was most attractive. I had also participated in a previous course run and directed by Julia Short (The Media Business School, MD Marketing and Distribution) and having her run this programme was something that motivated me enormously to try to pursue this opportunity.

Based on your experiences of Inside Pictures, what could you say to encourage other film professionals from Spain to participate in the 2020 programme?

I feel very lucky to have been selected for this year’s programme especially coming from a marketing background. It’s a chance to learn, meet very relevant professionals from the international global film industry and meet 19 other participants from very different international backgrounds who I know will be meaningful in my work/life for years to come.  I would encourage anyone that has a passion for international film and wants to continue working in film to take the time from their schedules and apply, because it is enriching as a film executive or producer and enriching as an individual and leader.

Your career before film was with multinational ad agencies. What’s a universal truth to all products or otherwise in terms of marketing and what have you discovered are key differences between the demands of film marketing and other products and services you may have worked on before film?

For me the universal truth is that the people, the consumer, has limited time, attention and interest. The deep understanding of the consumer behaviour has to be at the centre of any marketing and communication strategy, especially in film where each movie has its own voice, positioning and target audience which needs to breakthrough in an over saturated market space week on week.

Different to other industries where you might be encountering a myriad of challenges based on the category, products, lifecycle, competitive changes etc., in film we usually focus our work on product launch. Getting the film known and the audience interested before and just as we go to market.

It’s absolutely essential, to leave room for creative thinking – it is essential when marketing a film (no matter the scale or scope) to think outside the box and leave some room to explore different and creative ways of engaging with the film audience.

Which of your film projects are you most excited about right now?

I am in the midst of launching 1917, a war epic directed by Sam Mendes. The film is an immersive and emotional edge of your seat insight into the heart of World War I. We have just had the privilege of hosting Sam Mendes in Madrid, Spain for a press day and screening of the film to Spanish opinion leaders and audience and the whole visit was a great success. I have no doubt the film will be nominated to numerous Golden Globes and Academy Awards and audiences worldwide will love it.

I am also working on the launch of BOMBSHELL, directed by Jay Roach and starring: Charlize Theron, Nicole Kidman and Margot Robbie. It’s based upon the true story of several women at Fox News who set out to expose CEO Roger Ailes for sexual harassment. For this film we are speaking to a number of female associations and groups in Spain as well as relevant female opinion leaders in the news and entertainment world to see the film and generate awareness toward the film and story. I’m sure this film will also get several award nods.