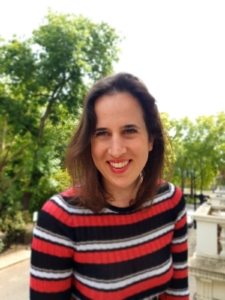 Samantha is currently at Ingenious, where she works as a Senior Investment Associate on the film team. She and the team source and evaluate film projects and lead commercial negotiations across the financial close of independent features from across Europe and the USA. In under two years at Ingenious, she has worked with numerous highly acclaimed filmmakers and been involved in closing more than 10 multi-party film transactions across several jurisdictions.

Prior to Ingenious, Sam worked for the Head of Finance at Working Title where she spent over three years on the finance team, managing the accounts payable function across the London and Los Angeles offices. During her time there she gained invaluable insight into the studio financing system and into the development and production side of the award-winning Working Title slate.

Sam moved from Australia to the UK 16 years ago and has called London home for just over a decade. Graduating from university with a Mathematics degree, her first foray into the film industry was assisting the Finance Director at Prescience Film Finance in Beaconsfield, just down the road from the NFTS. It was during her time at Prescience that Sam had her first Cannes film festival experience and from that point knew she was in the industry for the long haul!

Camaraderie is so important in independent film. Once you’ve got peers of a similar level and experience to yourself, then you can grow together – it’s strengthening. Getting to know new people across the whole value chain of the industry is one of the most valuable parts of IP for me. Similarly, the fantastic range of guest speakers has provided interesting and useful insight so far.

I love how film is a very people-friendly industry and grounded on good, working relationships. If you get along with someone, it’s likely that you’ll work with them and hopefully work with them again and again. That was my main motivation for applying to IP and I’m very grateful for the opportunity.

It’s an important time to be doing IP because we’re clearly at quite a unique point in history in the film industry on a global scale. I was curious what ideas and visions the speakers would bring to discussion about where the industry is headed during this time. Are we going to be okay, or is it doom and gloom? After Module One, I was pleasantly surprised there was a lasting sense of positivity for creating a new future for cinema.

Admittedly, undertaking IP online removes the face-to-face interaction that I find to be key to building meaningful relationships, however as a group I feel we’re doing really well to overcome this obstacle. We may even turn out a closer cohort as a result.

Ultimately, I like to think the pandemic has brought us closer together. Everyone, from all backgrounds within the industry, has needed to start from the same page.

How do Ingenious source new film projects? How do they reach your desk and/or how do you reach out to the filmmaker?

It’s mostly about establishing good working relationships. For example, we may work with a certain producer once and if it’s a mutually good experience, hopefully they will come to us again with their next project. Most of our deal flow comes this way, or via sales agents with whom we’ve built strong track record together. Generally, Ingenious would come on board a project once the sales agent is attached and the film is pretty much ready to go into production.

Ingenious also has partnerships with US mini-major studios, Solstice and AGC being two examples. Both partnerships provide a pipeline of quality, highly commercial, mid-budget movies. Unhinged (2020), starring Russell Crowe, was the first release through the Solstice partnership this year.

I’m fortunate to work with an incredibly strong, experienced team with an extensive network and many years of international industry experience that allows us to reach and work with talented filmmakers from all over the world.

What’s more important/how do you value? Quality of the script or the market perceptions of the team behind the project and/or the investment potential of the overall idea?

That’s the (multi) million-dollar question… When sourcing and evaluating projects, my role at Ingenious requires me to focus on its commercial potential and consider the film’s reach to a wide, international audience. In order to achieve that, we need to consider the combination of all of the factors you mention.

We look for great stories and the creative aspects behind them, and weigh up the script, budget and finance plan with the talent attached, and many other variables. On paper, any project can tick all the right boxes, but every single film is different and there’s no one way to guarantee its commercial success. That’s what makes the job so interesting. We place great value on who is working on the movie too. You’ve got to know that it’s going to get made, to the standard that you and audiences would expect. Therefore, it can be just as important when saying yes to a project to know that the production team have a track record of making high-quality movies.

What are the most challenging aspects of negotiation when closing finance on indie films? Typically, how many stakeholders will be involved?

It’s key to understand that everyone’s interest in the project will be different, everyone’s risk will be different, and it’s good to have the deal terms negotiated as early as possible in the closing process. Often we’re up against it time-wise, and yes, there can be many parties involved in closing finance on an indie film…

Typically, the stakeholders in a closing could be:

And then of course, most importantly, every single party has a lawyer!

All of the above will most likely be spread all over the world, which makes every single deal closing different, interesting, and time-zone traversing.

Closing often takes many weeks (months, even) which makes it all the more rewarding once it’s then over to the producer to go and make a brilliant movie…

The impact of COVID has put stress on the entire value chain. With cinemas forced to close, distributors can’t release their films theatrically, and this has a domino effect right back through the chain. The impact on each individual film will depend on where it’s at in its production lifecycle (e.g. pre-production, production, post, delivery, etc.).

However, it’s been positive to see films going back into production again and Ingenious has been very active in funding safe, contained productions over the last few months, in various international locations. Albeit the process now to financially close a production presents more challenges than before. Not only are we navigating all the additional considerations and protocols but balancing this with a constantly changing environment, that is different in every jurisdiction. For example, we are currently involved with a film based in New Zealand, one of the first of ours that financially closed and went into production during the COVID outbreak. At the time, New Zealand was one of the safest countries in terms of number of cases, and yet by the end of August 2020, New Zealand was at Alert level 3, which meant the production had to go on hiatus. This starting-and-stopping puts immense pressure on producers, and I’ve really admired how extremely well-prepared production teams have become for any situation during these times.

Above all, it’s rewarding to see that it has certainly been possible in these COVID times.

What lasting effects of COVID might lead to change in your medium/long term visions and aims?

Personally, working from home has been the most significant lifestyle change and one that will likely become the norm. Admittedly, it has been tough to get used to because I work so closely with my colleagues, but the efficiency and productivity of working remotely has been surprising.

With regards to my long term aims, I’m not quite sure yet…!

Most notably, probably the use of Zoom! It really has been remarkably effective keeping us together whilst apart. An interesting example of this has been the Screen Daily Zoom talks with experienced speakers from across the industry, unpacking the issues that they’re going through in real-time as a result of COVID. This opportunity to speak face-to-face has not only kept us connected, but almost brought everyone closer, as I said earlier. That feeling of all being in it together in this extraordinary situation, no matter your background or experience.

The prevailing determination and guts to keep things going despite the circumstances – I’ve found that really inspiring. From virtual film festivals to the Inside Pictures programme – the creativity, innovation and teamwork it must involve delivering such events in a totally different way. So encouraging!

How well is/has your government done serving the film industry during COVID?

The UK launched the Film & TV Production Restart Scheme, which has meant that films can go into production here with this Scheme providing financial support (up to a certain limit) that can be reclaimed should there be costs incurred due to COVID-related incidents. It’s early days – let’s see how it goes. A helpful and positive step forward, though.

I’m currently involved in a documentary film about boxing, so my fascination with sports documentaries during lockdown has probably stemmed from that. Likewise, I think I’ve found comfort in watching that team spirit being realised on screen, since working from home has removed the physical interaction I have with my own team at work. I particularly enjoyed The Last Dance (2020), Cheer (2020) and Athlete A (2020) on Netflix.