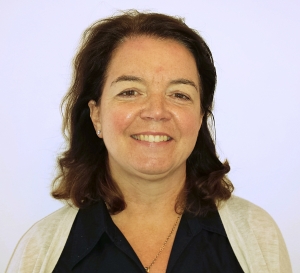 Agneta has been head of Feature film acquisition at SVT, the public broadcaster in Sweden,  since 2010 based at SVT International. In 2012 she became part of the editorial Feature Film Group at SVT, which decides on pre-buys and co-productions of Swedish feature films.  Since September 2015 she is acting chair of this group.  SVT can pre-finance if the film is Swedish or an international co-production through a Swedish minor.

SVT has a market share of 30%. We broadcast approx 450 feature films per year including re-runs and older Swedish films in the daytime and also some classic international films in the evening slots. The job includes selection, making the deals and planning the slots together with the scheduling department.

With a love and keen interest for film and TV but also wanting a more formal education Agneta joined the Swedish TV-industry following a BSc in Business and Economics just as the monopoly of public service cracked (1988). She soon found a place in tv-drama and features starting out as production accountant but later becoming financial/production controller at Moviola Film and Television (Fiendens fiende, Vendetta) and at Grundy/Pearson Television Sweden on Skilda världar (based on the format Sons & Daughters). This eventually lead to job at SVT as head of production controlling for Drama/Ent/Factual/Childrens in Stockholm. In 2007 she took the job as Head of Business affairs in Programme acquisition which later merged with the Sales department as SVT International.

Some recent acquisitions are: Carol, Mustang, The Clouds of Sils Maria, Theory of Everything, The Club (Larrain), Rams, Angry Indian Godesses but also The Shawshank Redemption, The Bitter Tears of Petra von Kant, Halloween (1978) and Casablanca.

SVT is a proud co-producer of A Pigeon Sat on a Branch…(Roy Andersson), The Serious Game (Pernilla August), The Square (Ruben Östlund), My Skinny Sister (Sanna Lenken), A Man Called Ove (Hannes Holm), Borg vs McEnroe (Janus Metz), Euphoria (Lisa Langseth) among others.

You have spent two days with Inside Pictures this year. What is your impression of the programme? What makes it different from other programmes you might be aware of?

A couple of things come to mind:

The total number of participants is big enough to make sure there are people with different perspectives representing different jobs (not just producers) and so personal relationships can easily be forged. And everyone fits around a good size board-room table.

The participants themselves have a come a long way in their careers so this is really on a “post-post graduate” level.

The speakers were in top executive positions in their field, representing relevant and important experiences and also sharing cool but discreet bits of business intelligence.

I listened in on some of the other speakers and they all talked in an inclusive way rather than lecturing. I am sure the size of the group contributes to the atmosphere.

Personal relationships are some of the fundamental factors in getting things done in this business, especially when things get tricky, so I can’t think of a better or more efficient way to broaden your network, than this programme, while at the same time developing your own skills and perspectives. 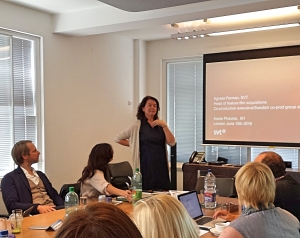 SVT plays an important part in co-producing and licensing Swedish productions and co-productions, however you also acquire non-Nordic features for your programming. In your experience what kind of films work best for your channel and your audiences?

A Swedish language film will generally get better viewing on TV than a comparative film from another country, but the point of the feature film slate from a public service perspective is to have films from different genres and countries.  The audience wants to see new things but also revisit films which are not necessarily from the last few years. Having some “knowns” in the mix; a well known title, a name (talent) or a key award helps also for non-Swedish films. Doing series of films around talent or language e.g. or being able to be timely can also boost viewership. The week Alicia Vikander got the Academy Award we made a change in the schedule to broadcast A Royal Affair. A no-brainer but it was nice to be able to share in some of that excitement.

Is there a film you have worked on and which holds a special place in your heart? Please tell us why?

That is a little bit like asking which is my favourite child, but OK.

SVT has been a top financier for the last four years, which means we are not heavily involved in developing and usually come aboard at a late stage. “My Skinny Sister”, from 2015, is a film that I got to know of a few years earlier and which had a difficult subject, a teenage girl with an eating disorder. The key to the story was that it is told through the eyes of her younger sister. Casting took quite some time and we had made the decision to co-produce. The director, Sanna Lenken, was a first-timer, and the casting of the two sisters ended up being really inspired choices. The film turned out very well and won the Generation Kplus in Berlin. They had all worked so hard for the final result. I am looking forward to our broadcast on SVT, even though I know that the subject itself is a challenge.

The market is shifting constantly. In your view what is are the main challenges your business faces today? Will there still be space for feature films on TV in the future?

Yes, my belief is that the 100 minute-format is a wonderful format for telling a story. For us the key is having on-line rights at the same time. A feature film is a “single shot” in the broadcasting schedule. With an on-line period at the same time we can create an awareness that the film is available to see for another two to four weeks.

In general financing is the big issue and how it will be generated while working to modify the existing viewing structure. One of the things I took home from listening in on some of the talks in London is that day-and-date openings seem to be more frequent in the UK than in Sweden. We have to try whatever can work against piracy and to experiment to maximize the monetary streams from on-line publishing for the to make up for what has been lost. The business is still hurting from the DVD-collapse. “My” window, free TV, is the last one in the current chain for new films. I would love to see the time shortened, and so would the viewers.